'I don't know why he's all bent out of shape,' Mitch McConnell hits back at Jon Stewart over 9/11 Fund

After Jon Stewart tore into the House Judiciary Committee&nbsp;for being noticeably absent during a hearing on a bill that would advance the 9/11 Victim Compensation Fund until 2090 last week, he's now taking shots at Mitch McConnell for what he views as a lack of compassion.

WASHINGTON D.C. - After Jon Stewart tore into the House Judiciary Committee for being noticeably absent during a hearing on a bill that would advance the 9/11 Victim Compensation Fund until 2090 last week, he's now taking shots at Mitch McConnell for what he views as a lack of compassion.

Stewart appeared on Fox News in an interview with Chris Wallace for “Fox News Sunday” during which he discussed his emotional appeal to the House subcommittee last week, explaining that the 9/11 first responder community is tight knit and perpetually dealing with the trauma of illness and death, saying, “Last week, seven — seven — first responders died due to 9/11-related illnesses.”

“I want to make it clear that this has never been dealt with compassionately by Sen. McConnell,” Stewart said during the interview, “He has always held out to the very last minute, and only then, under intense lobbying and public shaming, has he even deigned to move on it.”

“I don't know why he's all bent out of shape, but we will take care of the 9/11 Victim Compensation Fund,” McConnell said during an interview on “Fox & Friends,” after being asked what he thought of Stewart's comments.

Stewart has been fighting diligently for years to support and aid the men and women who were first responders during the Sept. 11, 2001 terrorist attacks on the World Trade Center towers in New York City.

In February, Stewart wrote an op-ed for the New York Daily News after he, once again, went before Congress with first responders and survivors to plead for an extension of the VCF, writing, “The fact that we continue to need to do this is beyond my comprehension.”

At the time, the Justice Department had just announced that a lack of funding led to the need to make crippling budget cuts to the VCF, lessening pending compensation awards for injuries caused by toxins by between 50 and 70 percent.

“This will impact thousands of 9/11 responders, survivors and their families who have been waiting years for help,” Stewart argued, “This is madness.”

Without any action from Congress to renew it, the VCF would expire in 2020, and many members of Congress have been vocal about the necessity of extending protections for months now.

“We fought for and passed the 9/11 Victims Compensation Fund to provide peace of mind to those sickened after the horrific attack,” said Sen. Charles Schumer after the bill was introduced in Oct. 12, 2018, “For too many, ailments and disease from exposure to that toxic airborne brew have taken years to show up and – as the need for the fund grows – the chance it may not have adequate resources to take care of our heroes is just unacceptable... There is no time to waste when people are waiting in line for the care they deserve.”

“As each day passes without permanent re-authorization and full funding, anxiety and suffering grow – and that is unacceptable,” Rep. Carolyn B. Maloney said after the bill was introduced, “Our 9/11 heroes answered the call when we were attacked, and now Congress needs to answer the call and stand up for them.”

Last week, when asked about the new bill during a news conference, McConnell admitted that the VCF wasn't even on his mind, saying “Gosh, I hadn't looked at that lately. I'll have to.” 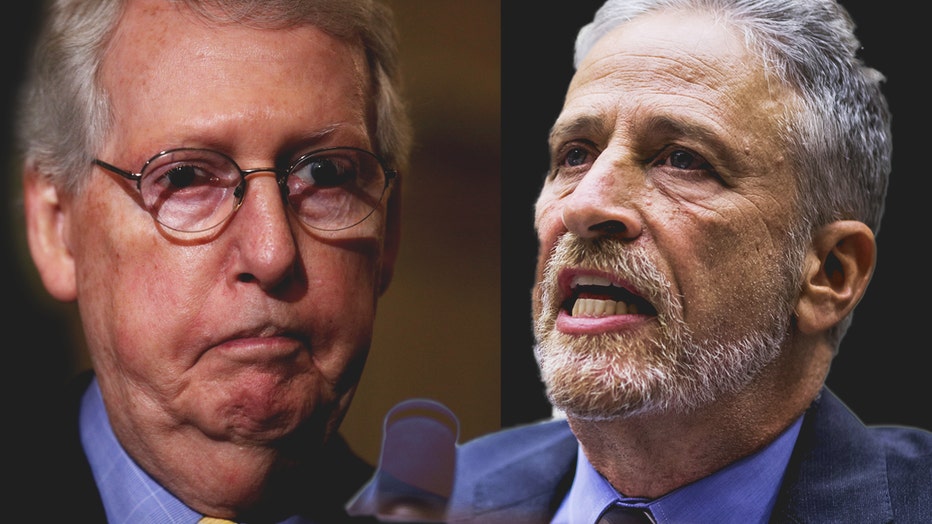 The hosts of Fox & Friends pressed McConnell during his Monday interview, asking, “Why has it always seemed that the vote comes at the last minute?”

“Well, many things in Congress happen at the last minute,” McConnell responded, “We have never failed to address this issue, and we will address it again.”

Stewart argues that the battle for first responders and survivors should be long over.

“I think this community is at the end of their rope,” Stewart told Chris Wallace, “I think there’s a feeling of disbelief, that they can’t understand why they have to continually saddle up and ride down to Washington and make these appeals for something that should be simple but is somehow, through politics, made agonizingly difficult.”