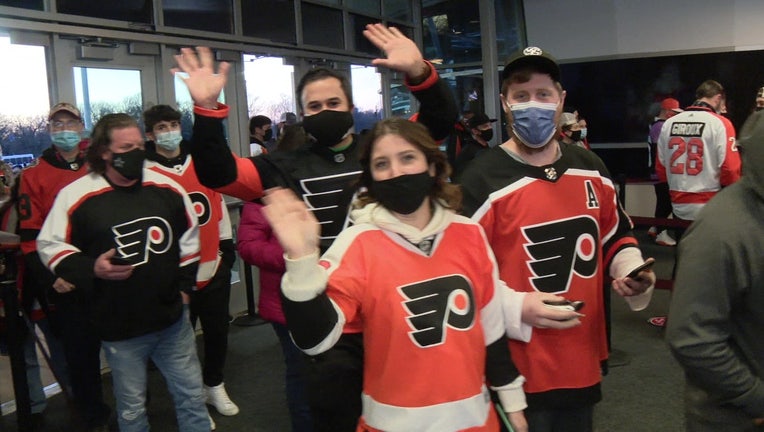 Flyers fans returned to the Wells Fargo Center on Sunday.

PHILADELPHIA - The Wells Fargo Center on Sunday welcomed just over 3,000 fans back inside for the first time since last March as improved caseloads of COVID-19 allowed Philadelphia to relax some restrictions on large indoor gatherings.

Fans who were lucky enough to return to the arena to watch the Flyers host the Capitals were required to wear a mask unless eating or drinking. Stadium seats were sold in pods of 2-4 and properly spaced out to ensure social distancing.

The soft reopening also required fans to answer a health questionnaire before they entered the gate. Large bags and purses were banned from the arena, and all purchases were mobile and cashless.

"I haven't seen some of these folks in almost year, it feels great to be back," said Vito Schimenti who has worked at the Wells Fargo Center for over 20 years. He and 650 other workers staffed at the arena were happy to see fans back.

The Flyers, who entered Sunday fourth in the Eastern Division, got the fans excited early with Joel Farabee's 11th goal of the season in the first period. But Washington responded with three unanswered goals to spoil the Flyers welcome back party, 3-1.

Flyers fans chanted "Let’s Go Flyers! Let’s Go Flyers!" early in the contest, something you could hear with just an artificial soundtrack up to this point this season. They loudly booed and directed catcalls at the officials after Travis Konecny was whistled for goaltender interference in the first period.

During a stoppage in the second period, they saluted Oskar Lindblom, who returned to the ice this season after battling cancer for much of last season, with a loud ovation.

For most Flyers fans, Sunday meant more than what played out on the ice.

"I feel like my life is getting back to normal, just being here," one fan said.