Ailani Myers, 3, and Ryan Jacoby, 8, are both of mixed races and in need of potential donors to join the Be The Match marrow registry.

LOS ANGELES - Experts say the cure for blood cancers like leukemia lies in finding a perfect donor match and a successful transplant. But some patients can have a harder time finding that perfect match than others, depending on their ancestry and ethnic background.

Ailani Myers is a 3-year-old girl who loves princesses, mermaids and the color pink.

While visiting family earlier this year in Texas, her mother, Princecine Johnson, took her to a clinic after noticing some blood spots under her skin. Further tests confirmed she had developed an aggressive form of leukemia, shortly before her third birthday.

Her father, Kurt Myers, who is active-duty Navy, was temporarily working in Florida at the time and was reassigned to Texas while she began treatment. Ailani suffered a couple of setbacks there, and their oncologist recommended they transfer to a larger hospital to seek further treatment, Myers explained.

In early May, the family relocated to Johns Hopkins Hospital in Baltimore.

“Once arriving at Johns Hopkins Hospital, it was immediately recommended that Ailani receive a bone marrow transplant as soon as possible,” her father said, who is now in a desperate search to find a perfect donor match for his daughter.

Ailani is an only child and multiracial — half black and half white.

Approximately 70 percent of patients do not have a fully matched donor in their own family, which leaves them to search the registry. And depending on a patient’s ethnic background, the likelihood varies of finding the perfect match. Most prospective donors are white.

Amy added that there isn’t data on mixed-race patients.

Here's how it works: Your “HLA,” or tissue typing, is used to match patients and donors for blood or marrow transplants and is inherited from your ancestry, according to Be The Match.

A patient is more likely to match someone with a similar ethnic background or ancestry.

“Each of your brothers and sisters who has the same mom and dad as you has a 1 in 4 chance of being a complete, or full, match,” the registry's website explains. “You’re more likely to match someone with a similar ethnic background or ancestry.”

Adding more members who increase the ethnic diversity of the registry increases the variety of tissue types available, which in turn, helps more patients find the match they need.

That is why Ailani’s parents are now desperately trying to get the word out to anyone who is willing to join the registry, either by visiting join.bethematch.org/4Ailani or by texting the code “4AILANI” to 61474.

“She fights her leukemia with bravery and strength while still being a sweet, kind, and polite little girl,” her father said. 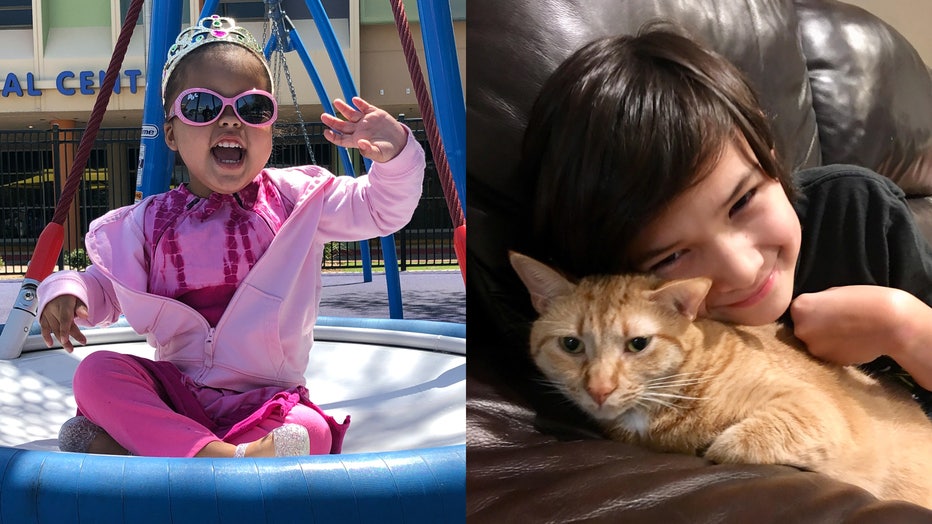 Ailani Myers, 3, and Ryan Jacoby, 8, are both of mixed races and in need of potential donors to join the Be The Match marrow registry. (Provided images / family)

Ailani, whose name is Hawaiian for “High Chief,” has “the spirit of a warrior,” her father added.

“If it’s a perfect 10 out of 10 donor and they have a successful transplant, she's cured of her disease,” Amy said.

Ryan Jacoby, an 8-year-old who lives in Los Angeles, loves dominating in Fortnite and Super Smash Bros. as well as playing with his kitten named Sonic.

“Ryan is a conniving, yet a sensitive and loving boy,” his father Chris Jacoby said. “He is very smart and always willing to share facts about animals and anything else he has absorbed through books, TV and YouTube. He has a YouTube channel and looks forward to growing up to be a YouTube star like Ninja, and working at Nintendo to make cool video games and fix their glitches.”

Ryan was diagnosed with acute myeloid leukemia in April 2017, just one month before his sixth birthday.

His mother is Vietnamese and his father is Caucasian. Like Ailani, finding a match is difficult for Ryan because of his mixed ethnicity.

Ryan remained in remission until late February of this year, when the Jacoby family learned the devastating news that his cancer had returned.

“He asked for a kitten while undergoing treatment the first time and as soon as he finished the 100 days after transplant and the doctors gave us the green light, we adopted Sonic for him and Sonic’s sister, Peaches, for (his sister) Mikayla,” Chris Jacoby said. “They both adore their kittens and being away from ‘his boy Sonic’ during the extended hospital stays has been hard. He tries to FaceTime with the kittens every day.”

Ryan underwent another round of chemotherapy, and now his parents are seeking out potential donors who are half Asian and half Caucasian to join the Be The Match marrow registry by visiting join.bethematch.org/match4ryan.

People between the ages of 18 and 44 can register to join, and those who may have previously joined the registry in the past are also encouraged to keep their contact information updated.

“Each person has the unique ability in themselves to be a cure for someone else,” Amy with Be the Match explained. “All they have to do is make their own personal decision to register and make that commitment that if they match someone, they’re willing to step up and provide that donation for them.

“If each person makes that decision, then they make a greater change.”