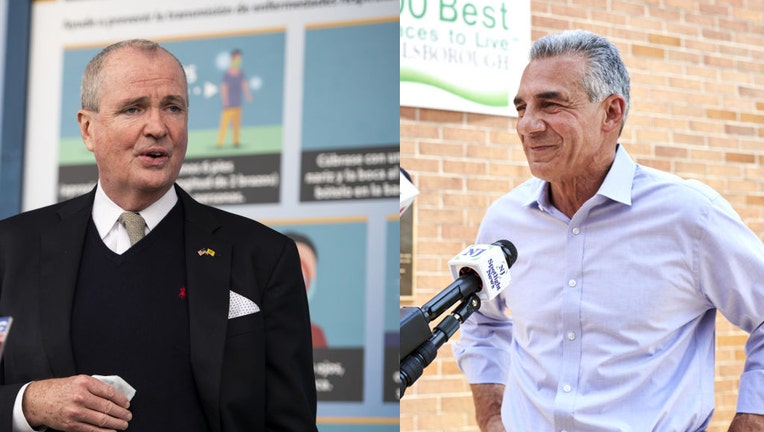 Jack Ciattarelli, Republican candidate for governor of New Jersey, speaks with members of the media at the Hillsborough Municipal Building voting center during the Republican primary election in Hillsborough Township, New Jersey, U.S., on Tuesday, Ju

TRENTON, N.J. - New Jersey Democratic Gov. Phil Murphy and Republican Jack Ciattarelli sparred in an at-times testy and raucous debate Tuesday in the first of two meetings in this year’s campaign for governor.

Murphy, a first-term Democrat, and Ciattarelli, a former GOP Assembly member, met at the New Jersey Performing Arts Center in Newark in a debate interrupted continuously by cheers and boos from the audience despite pleas from moderators.

Murphy’s handling of the COVID-19 outbreak took center stage early on, specifically his management of the pandemic in nursing homes, which account for roughly a third of the state’s 27,000 deaths. Ciattarelli criticized Murphy’s order in early 2020 requiring nursing home residents to return from hospitals regardless of their COVID-19 status.

Murphy defended the order, as he has for months, saying the facilities were the residents homes and management was required to keep returning residents separate from other residents. Murphy pivoted quickly, though, to mask and vaccine mandates, which his opponent has been skeptical of.

"Saying that it’s your call and government can’t mandate a vaccine or no masking is akin to drunk driving," Murphy said. "It impacts the person whose driving drunk and all of us."

The governor also attacked Ciattarelli for saying that whether people get the vaccine is up to them. Murphy has mandated the vaccine or regular testing in a number of industries in the state, including health care, schools and day cares.

Ciattarelli said he has been vaccinated and thinks people should get vaccinated, but he draws a distinction at what government should be requiring.

"Do I believe government has a right to tell people that they have to take a medicine?" He said. "No."

On whether young children should wear masks in schools, Ciattarelli said it should be up to parents. Murphy has signed an executive order requiring masking in day cares, as well as in the state’s schools.

Ciattarelli said he agreed, though, with Murphy’s requiring teachers to get vaccinated or undergo testing. People should have a choice, he said.

Packed into an hourlong debate were seemingly endless clashes.

There was little the candidates found common ground on — except they both praised the diversity of the state.

On taxes: Ciattarelli repeated a campaign-long criticism of Murphy that seized on a clip of him saying that "if taxes are your issue, then we’re probably not your state," saying the comment was disqualifying in a state like New Jersey leads the nation in property tax rates.

Murphy cast the election repeatedly as a question of "continuing to move forward" or going back, an allusion to former GOP governor Chris Christie as well as former President Donald Trump. He touted the hike in taxes on those making more than a $1 million a year on his watch, an increase in school aid and the state fully funding public workers’ pensions.

He also pledged that if reelected he would not raise taxes again.

Ciattarelli wasn’t alone in labeling actions disqualifying. Murphy said a Jan. 6 rally, in which clips show Ciattarelli speaking in front of someone holding a "Stop the Steal" sign made Ciattarelli unfit for office. Ciattarelli has said he didn’t know the event was being held in support of Trump’s false contention that the 2020 election was stolen. On Tuesday, he acknowledged that Biden was the president and said Trump’s rhetoric led to the Capitol insurrection that same day.

On abortion, Murphy pointed to Ciattarelli’s votes in the Assembly against funding women’s health services, including for Planned Parenthood. He said his opponent wanted to turn New Jersey into Texas.

Ciattarelli disavowed the Texas law and said he supports Roe v. Wade, but not late-term abortions.

On gun control, Ciattarelli contended that Murphy would probably like to end the 2nd Amendment. Murphy protested, but touted laws he signed to tighten the state’s gun laws, red-flag legislation and a bill that limits magazine clips to 10 rounds.

Murphy is trying to become the first Democrat in 44 years to win reelection and to buck a trend going back to 1985 that has seen the party of the president lose the New Jersey governorship.

Ciattarelli faces headwinds of his own. Down by double digits in publicly available polls, he faces a Democratic registration advantage of 1 million more voters. He’s also not a universally known figure in the state.

Ciattarelli is a former state Assembly member and the founder of a medical publishing company. He has an accounting background and hinges his campaign around affordability, arguing New Jersey’s taxes are too high.

Becoming governor is Murphy’s first elected political position. He’s served as Barack Obama’s ambassador to Germany and before that was an executive at Goldman Sachs.

New Jersey will have early in-person voting from Oct. 23-31. Election Day is Nov. 2.

The debate was produced by New York and Philadelphia ABC affiliates, along with Twitter, Univision, WBGO radio, NJ.com and Rutgers Eagleton Institute of Politics.