NEW YORK - On September 11, 2001, more than 2,600 people perished at the World Trade Center, 125 people died at the Pentagon and 256 people died on four airplanes after terrorists hijacked the planes and turned them into guided missiles.

It’s been 18 years since those events transpired, since “the United States became a nation transformed,” as the 9/11 Commission Report said.

Here is a timeline of what happened on that day. This timeline is a compilation of reports from the Associated Press, the 9/11 Commission Report and the 9/11 Memorial. All times are in EDT.

5:45 a.m.
A total of 19 hijackers begin passing through security at various airports.

7:59 a.m.
American Airlines Flight 11 takes off from Boston’s Logan International Airport. The Boeing 767 is headed toward Los Angeles with 92 people on board, comprised of 11 crew members, 76 passengers and five hijackers.

8:24 a.m.
One of the hijackers on American Airlines Flight 11 accidentally calls ground control when trying to transmit a message to the passengers in the plane’s cabin, unwittingly alerting ground control to the attacks. Victor J. Saracini, the pilot of American Airlines Flight 175, hears the accidental transmission and alerts the Federal Aviation Administration just minutes before his plane is hijacked.

8:42 a.m.
United Airlines Flight 93 takes off from Newark International Airport for San Francisco. The Boeing 757 has 44 people on board, comprised of seven crew members, 33 passengers and five hijackers.

8:46 a.m.
The first plane crashes. American Airlines Flight 11 strikes the North Tower of the World Trade Center traveling at hundreds of miles per hour and carrying around 10,000 gallons of jet fuel. The flight crashes into floors 93-99 and severs all three emergency stairwells, trapping hundreds of people above the 91st floor. 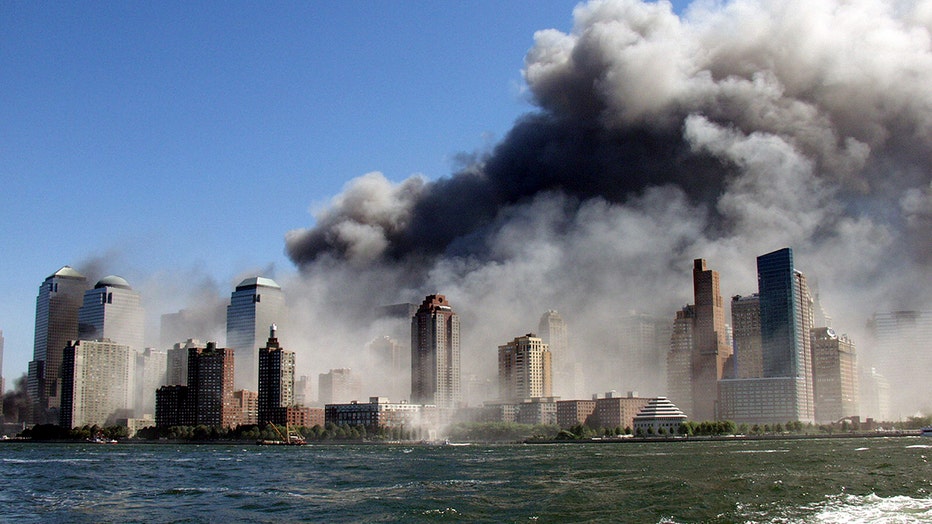 Smoke rises over the New York Skyline from the scene of the World Trade Center Attack, as seen from a tugboat evacuating people from Manhattan to New Jersey. (Hiro Oshima/WireImage)

9:03 a.m.
The second plane crashes. United Flight 175 strikes the South Tower on floors 77-85. Two of the three emergency stairwells are rendered impassible and most elevator cables in the area are severed by the crash, trapping many on floors above the impact and in elevators.

9:05 a.m.
President George W. Bush is alerted to the second crash into the South Tower of the World Trade Center.

9:08 a.m.
FAA bans all takeoffs for flights nationwide which were either going to or passing through its New York Center airspace.

9:12 a.m.
Flight attendant Renee A. May and passenger Barbara K. Olson aboard Flight 77 call family members and alert them to the hijacking. Their family members alert American Airlines and federal officials.

9:21 a.m.
All bridges and tunnels into Manhattan are closed.

9:31 a.m.
From Florida, President George Bush calls the crashes an “apparent terrorist attack on our country.” He and his staff leave the elementary school and begin traveling back to Washington.

9:37 a.m.
The third plane crashes. American Airlines Flight 77 crashes into the western face of the Pentagon in Arlington, Virginia.

9:45 a.m.
FAA grounds all flights, ordering all aircraft to land at nearest airport as soon as practical. More than 4,500 aircraft are in air at the time.

9:45 a.m.
The U.S. Capitol and White House’s West Wing begin evacuating. The U.S. House of Representatives and Senate are in session.

9:59 a.m.
After burning for 56 minutes, the South Tower of the World Trade Center collapses. The collapse takes a shocking 10 seconds. More than 800 civilians and first responders are killed.

10:03 a.m. (approximately)
The fourth plane crashes. Heroic crew members and passengers of United Flight 93 storm the cockpit, forcing the hijackers to crash the plane into a field near Shanksville, Pennsylvania, at a location just 20 minutes’ flying time from Washington D.C. The 9/11 Commission Report determined that this plane was likely headed for Washington D.C. or the White House.

10:28 a.m.
After burning for 102 minutes, the North Tower of the World Trade Center collapses. More than 1,600 civilians and first responders are killed.

1:04 p.m.
President George W. Bush, at Barksdale Air Force base in Louisiana, announces that the U.S. military is on high alert worldwide.

Today, our fellow citizens, our way of life, our very freedom came under attack in a series of deliberate and deadly terrorist acts. The victims were in airplanes or in their offices: secretaries, business men and women, military and federal workers, moms and dads, friends and neighbors. Thousands of lives were suddenly ended by evil, despicable acts of terror. The pictures of airplanes flying into buildings, fires burning, huge -- huge structures collapsing have filled us with disbelief, terrible sadness, and a quiet, unyielding anger. These acts of mass murder were intended to frighten our nation into chaos and retreat. But they have failed. Our country is strong.
A great people has been moved to defend a great nation. Terrorist attacks can shake the foundations of our biggest buildings, but they cannot touch the foundation of America. These acts shatter steel, but they cannot dent the steel of American resolve. America was targeted for attack because we're the brightest beacon for freedom and opportunity in the world. And no one will keep that light from shining. Today, our nation saw evil — the very worst of human nature — and we responded with the best of America. With the daring of our rescue workers, with the caring for strangers and neighbors who came to give blood and help in any way they could.
Immediately following the first attack, I implemented our government's emergency response plans. Our military is powerful, and it's prepared. Our emergency teams are working in New York City and Washington D.C. to help with local rescue efforts. Our first priority is to get help to those who have been injured, and to take every precaution to protect our citizens at home and around the world from further attacks. The functions of our government continue without interruption. Federal agencies in Washington which had to be evacuated today are reopening for essential personnel tonight and will be open for business tomorrow. Our financial institutions remain strong, and the American economy will be open for business as well.
The search is underway for those who were behind these evil acts. I have directed the full resources of our intelligence and law enforcement communities to find those responsible and to bring them to justice. We will make no distinction between the terrorists who committed these acts and those who harbor them.
I appreciate so very much the members of Congress who have joined me in strongly condemning these attacks. And on behalf of the American people, I thank the many world leaders who have called to offer their condolences and assistance. America and our friends and allies join with all those who want peace and security in the world, and we stand together to win the war against terrorism.
Tonight, I ask for your prayers for all those who grieve, for the children whose worlds have been shattered, for all whose sense of safety and security has been threatened. And I pray they will be comforted by a Power greater than any of us, spoken through the ages in Psalm 23:

Even though I walk through the valley of the shadow of death, I fear no evil for you are with me.

This is a day when all Americans from every walk of life unite in our resolve for justice and peace. America has stood down enemies before, and we will do so this time. None of us will ever forget this day, yet we go forward to defend freedom and all that is good and just in our world.