Why we award the Nobel Prize

The Nobel Prize is widely considered one of the most prestigious awards celebrating human achievement in peace, medicine, physics, chemistry, literature and economics.

STOCKHOLM - The Nobel Prize for physics has been awarded to scientists from Japan, Germany and Italy.

Syukuro Manabe, 90, and Klaus Hasselmann, 89, were cited for their work in "the physical modeling of Earth’s climate, quantifying variability and reliably predicting global warming".

The second half of the prize was awarded to Giorgio Parisi, 73, for "the discovery of the interplay of disorder and fluctuations in physical systems from atomic to planetary scales."

The panel said Manabe and Hasselmann "laid the foundation of our knowledge of the Earth’s climate and how humanity influences it.

Starting in the 1960s, Manabe demonstrated how increases in the amount of carbon dioxide in the atmosphere would increase global temperatures, laying the foundations for current climate models.

About a decade later, Hasselmann created a model that linked weather and climate, helping explain why climate models can be reliable despite the seemingly chaotic nature of the weather.

He also developed ways to look for specific signs of human influence on the climate.

Parisi "built a deep physical and mathematical model" that made it possible to understand complex systems in fields as different as mathematics, biology, neuroscience and machine learning. 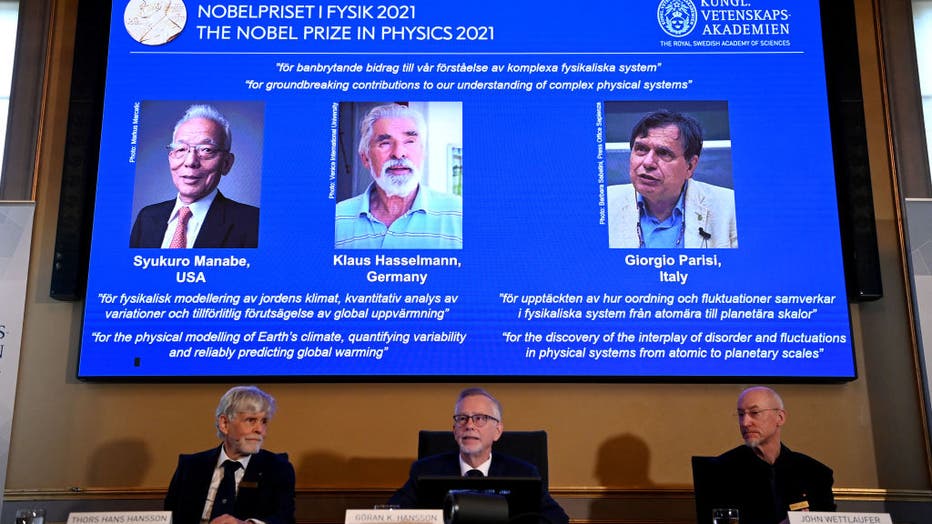 Goran K. Hansson (C), Secretary-General of the Royal Swedish Academy of Sciences, and members of the Nobel Committee for Physics Thors Hans Hansson (L) and John Wettlaufer (R) sit in front of a screen displaying the co-winners of the 2021 Nobel Prize

After the announcement, Parisi said that "it’s very urgent that we take very strong decisions and move at a very strong pace" in tackling climate change.

"It’s clear for future generations that we have to act now," he said.

The winners were announced Tuesday by Goran Hansson, secretary-general of the Royal Swedish Academy of Sciences.

It is common for several scientists who work in related fields to share the prize.

The prestigious award comes with a gold medal and 10 million Swedish kronor (over $1.14 million). The prize money comes from a bequest left by the prize’s creator, Swedish inventor Alfred Nobel, who died in 1895.

On Monday, the Nobel Committee awarded the prize in physiology or medicine to Americans David Julius and Ardem Patapoutian for their discoveries into how the human body perceives temperature and touch.

Over the coming days prizes will also be awarded for outstanding work in the fields of chemistry, literature, peace and economics.

RELATED: Nobel Prize awarded to US scientists for discovery of temperature, touch receptors