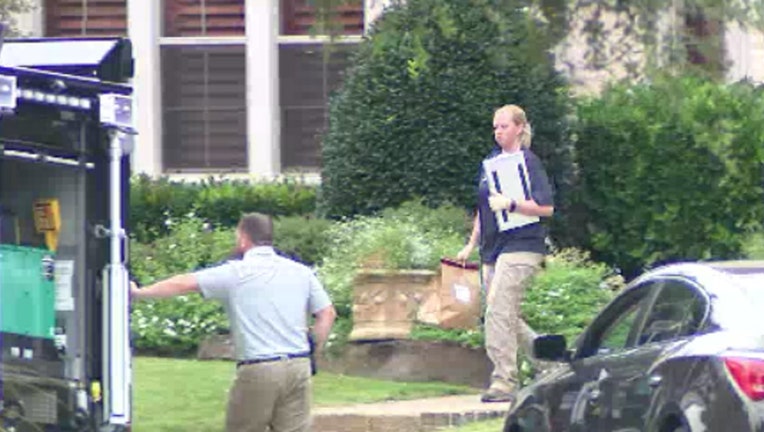 ALLEN, Texas - The grandparents of the 21-year-old suspect in the "domestic terrorism" mass shooting in El Paso released a statement, saying they "are devastated by the events of El Paso, and pray for the victims of this tragedy."

A family friend read off the statement for Larry and Cynthia Brown.

Authorities arrived at their Allen home just hours after 20 people were killed and 26 others were injured in the mass shooting at an El Paso Walmart late Saturday morning.

Their grandson was identified as the shooter, and the attack will be handled as a domestic terrorism case, federal authorities announced. The El Paso District Attorney said they will seek the death penalty.

MORE: Deadly mass shooting in El Paso to be handled as domestic terrorism

Here the full statement read by a family friend of the suspect's grandparents:

— "We are devastated by the events of El Paso, and pray for the victims of this tragedy. Patrick Crusius is our grandson. He lived with us in our house in Allen, Texas, while he attended Collin College. He moved out of our house six weeks ago, and has spent a few nights here while we were out of town. His driver's license and mailing address were at our house in Allen. That connection has made us a focus of media, of course. We are talking only to law enforcement agencies, and will not be making further statements to the media. We request the media to honor our privacy."

Agents from the FBI, ATF, and Texas Department of Safety, as well as Allen and Plano police officers, were at the house at one time.

Authorities remained on scene overnight Saturday, and blocked off streets surrounding the home.

FOX4 crews spoke to several people who live in the Allen neighborhood, but all of them said they had never seen the suspect.

Authorities had been seen going in and out of the home at different times, but at some point Sunday morning, a man inside the home was seen yelling at an FBI agent to "get the hell out of here."

Those at the scene saw agents remove several items from the home, including a bag and a white box.

Investigators say the suspect has no ties to El Paso.

The FBI got three search warrants for the Dallas area, as they worked to find evidence in North Texas to help give them answers in regard to the El Paso mass shooting.

The first instance was from 2014, when he was reported as a runaway. Two years later, he was on a Plano school bus during an accident.

And earlier this year, in March, Allen police said he called 911 to report a false alarm at his grandparents' house.