Volunteers rushed to evacuate not only horses, but also goats and other livestock.

SIMI VALLEY, Calif. - Volunteers rushed toward areas with “zero visibility” to evacuate horses and goats as a wildfire erupted Wednesday in the Simi Valley suburbs north of Los Angeles.

The blaze forced the evacuation of the Ronald Reagan Presidential Library and nearby homes, as both ends of the state struggled with blazes, dangerously windy weather and deliberate blackouts aimed at preventing new fire starts. The brush fire near the Reagan Library started before dawn between the cities of Simi Valley and Moorpark and exploded to more than 1,300 acres, threatening 6,500 homes, Ventura County officials said.

Near Castle Rock Farms, a horse named Rudy was being evacuated, as volunteers tried to get him and other horses into horse trailers.

“Everybody cares about the horses, and with the smoke and the fire, there’s a degree of panic, but the volunteers make it amazing,” said a man whose wife owns Rudy, the horse. “And we’re just trying to get him to safety.” 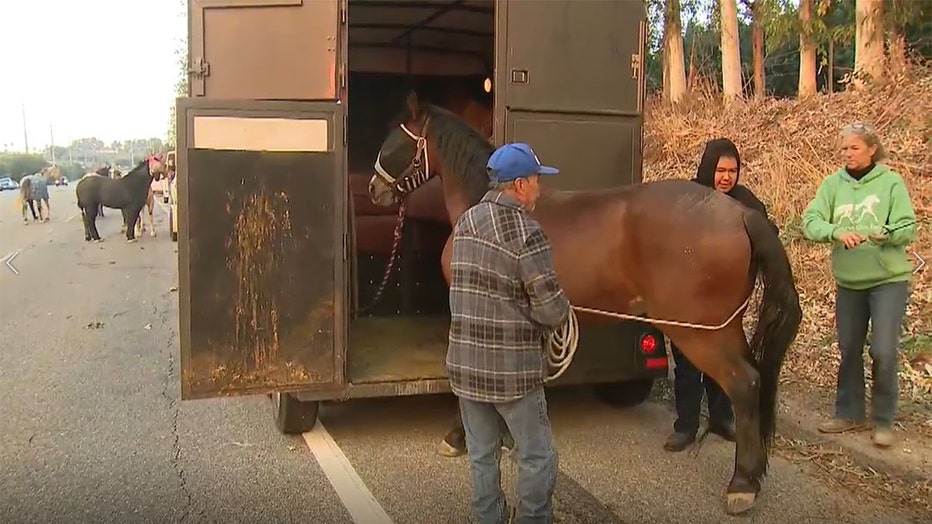 Volunteers rushed toward areas with “zero visibility” to evacuate horses and goats as a wildfire erupted Wednesday in the Simi Valley suburbs north of Los Angeles. (Photo: Fox 11 Los Angeles/KTTV)

Rudy appeared skittish and reluctant to enter the trailer. He was “not being very cooperative,” the man said.

The horses also had blinders to prevent them from being spooked by the flames, smoke or fire.

Another woman nearby was also rushing to evacuate her family and horses.

“A little stressed. My daughter just left with our 2-month-old grand-baby. So got the animals out. They’re in the car. We’re good,” she said. “Thank God we got them in the trailer no problem, because we couldn’t even see.”

The woman applauded the volunteers who rushed to save the animals.

“Everybody is pitching in together and keeping our fingers crossed and hoping for the best,” she said.

Volunteers rushed to evacuate not only horses, but also goats and other livestock. Some were seen carrying goats to safety through high winds, wearing masks to protect themselves from the smoke.

Ronald Reagan Presidential Library spokeswoman Melissa Giller said around mid-morning that the hilltop museum in Simi Valley was not damaged. She said that the flames came within about 30 yards of the property but that it was protected by aircraft dropping water and by a firebreak, a buffer zone that was previously cleared of brush by goats.

Hundreds of goats are brought in each year to eat away vegetation that could fuel wildfires on the 300-acre grounds, Giller said. Reagan and his wife, Nancy, are buried next to each other on a hillside at the library.

Helicopters and airplanes attacked the blaze as some 800 firefighters battled it on the ground. The flames pushed through sparsely developed hills between suburban tract developments.

Wind gusts up to 68 mph were reported in the area, forecasters said.

The National Weather Service issued an extreme red flag warning for high winds for much of Southern California through Thursday evening, with some gusts expected to reach 80 mph. It could be the strongest bout of winds in years.