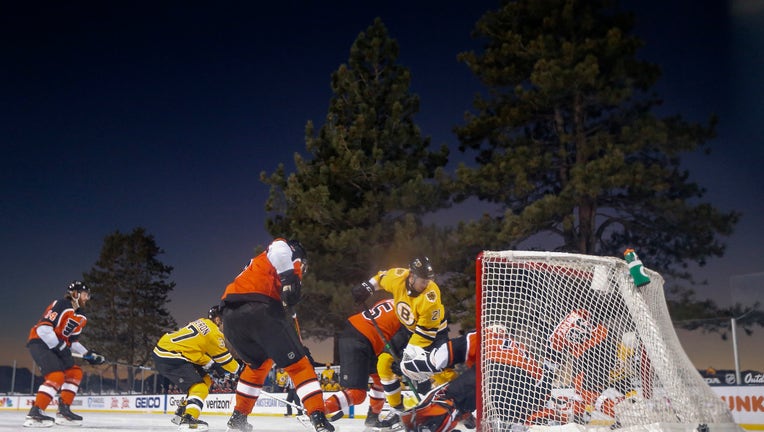 STATELINE, NEVADA - FEBRUARY 21: Nick Ritchie #21 of the Boston Bruins attempts a shot on Carter Hart #79 of the Philadelphia Flyers in the second period during the 'NHL Outdoors At Lake Tahoe' at the Edgewood Tahoe Resort on February 21, 2021 in Sta

STATELINE. Nev. - David Pastrnak had three goals and the Boston Bruins took control by scoring three times in a 1:39 span of the second period to beat the Philadelphia Flyers 7-3 on Sunday in an outdoor game on the shore of Lake Tahoe.

After a delay-filled opening game of the weekend between Colorado and Vegas because of bright sun that made for poor ice conditions, the game Sunday went off with fewer hitches. The Bruins’ high level of play matched the picturesque setting with the lake and snow-covered mountains in the background.

Pastrnak scored in the opening minute of the first two periods and then again late in the third to give him his second hat trick in three games against the Flyers this season. Charlie Coyle, Trent Frederic and Nick Ritchie scored in succession late in the second to give Boston five wins in five games this year against Philadelphia.

Joel Farabee, Sean Couturier and James van Riemsdyk scored for the short-handed Flyers, who have six players on the COVID-19 list. Carter Hart allowed six goals on 23 shots in the first two periods and has now given up 20 goals in four losses to Boston this season.

With the bright sun out again Sunday, the NHL had moved the game time to 4:30 p.m. PST to avoid the problems that led to a delay of more than eight hours on Saturday between the first and second periods.

The start of this game was delayed about 20 more minutes because there was some glare on the ice from the sun, but the ice was in good shape and the scenic setting that brought the NHL to the shores of Lake Tahoe to host games on a makeshift rink on a golf course was in full bloom. The sun began setting late in the first period over the Sierra Nevada for a breathtaking scene.