Santa Claus opens letters from all over the world, including the ones from penguins living at the London Zoo. (Credit: ZSL London Zoo via Storyful)

LONDON - Penguins are typically found near the South Pole, which would make them Santa Claus' most distant stop.

But the ones living at the London Zoo are much closer. And thanks to the zookeepers, St. Nick will be opening letters from them this Christmas season.

Zookeepers helped the birds post their letters to the North Pole on Thursday ahead of the zoo’s "fairy-lit festive wonderland" event. Taking place between Nov. 27 and Dec. 3, visitors will be able to follow an outdoor trail through the zoo’s 20,000 animals to find out what their favorite critters want for Christmas. 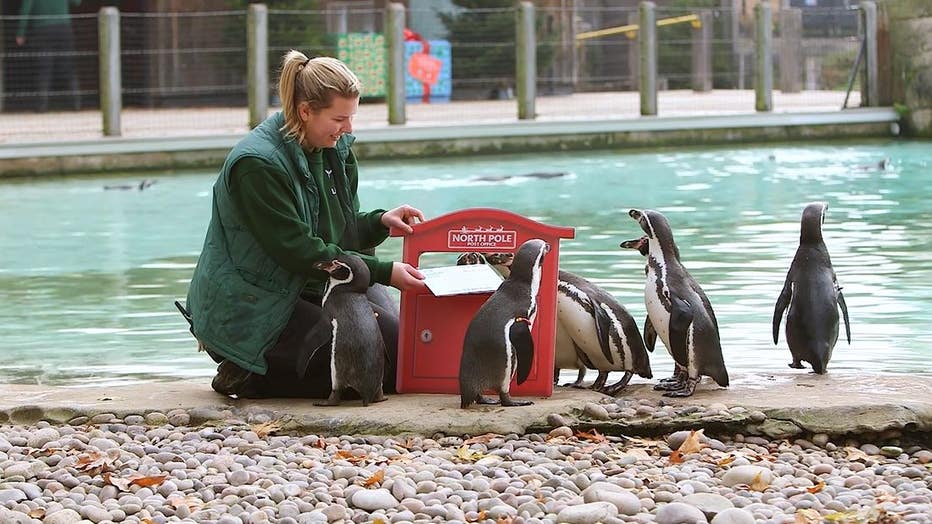 Santa Claus opens letters from all over the world, including the ones from penguins living at the London Zoo. (Credit: ZSL London Zoo via Storyful)

"We’re pretty sure Santa now knows to get something fishy for the penguins this year," penguin keepers Jessica Jones said, "but from this Saturday, we’re inviting visitors to become elves-in-training and help make sure Santa brings the perfect pressies for all the other animals — by taking a festive fact-finding trail across the zoo."

After completing the trial, visitors will be able to share their findings with Mrs. Claus in the polar postroom. Children are also invited to drop off their letters during the visit.

"Santa checks his post every day, so visitors may even spot him popping up from time to time on his own Christmas day out at London Zoo," Jones said.