NEW YORK - The Pfizer-BioNTech COVID-19 vaccine has been found to be at least 97% effective at preventing symptomatic COVID-19 cases, severe disease and death in real-world data from Israel, the companies announced Wednesday.

The data, collected by the Israel Ministry of Health, has not yet been peer-reviewed. But the real-world findings fall in line with those from the vaccine’s late-stage clinical trial, which reported 95% efficacy.

"This is extremely important... for society," Bourla told CNBC’s "Squawk Box" on Thursday. "The asymptomatic carriers and patients are the ones spreading the disease mainly." 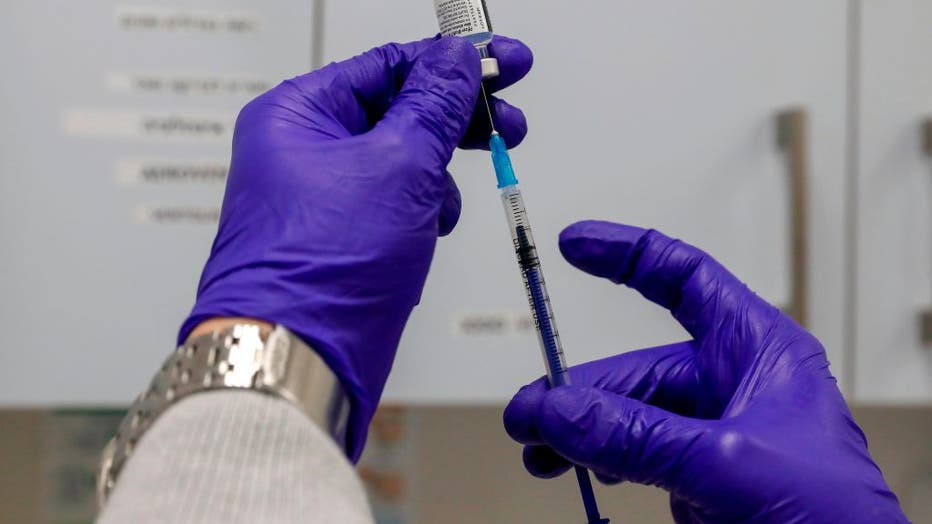 FILE - A health worker prepares a dose of the Pfizer-BioNtech COVID-19 vaccine at the Clalit Health Services in the Palestinian neighbourhood of Beit Hanina, in the Israeli-annexed east Jerusalem on March 2, 2021. (Photo by AHMAD GHARABLI / AFP)

Vaccine effectiveness was measured two weeks after individuals received their second dose. When the data was collected,  between Jan. 17 to March 6, the Pfizer-BioNTech COVID-19 vaccine was the only approved shot in Israel. It was also during a period of which the B.1.1.7 variant, originally detected in the U.K. and believed to be more transmissible, was the dominant strain in the country, researchers said.

"We are extremely encouraged that the real-world effectiveness data coming from Israel are confirming the high efficacy demonstrated in our Phase 3 clinical trial and showing the significant impact of the vaccine in preventing severe disease and deaths due to COVID-19," said Luis Jodar, Ph.D., Pfizer’s senior vice president and chief medical officer, in a press release. "The findings which suggest that the vaccine may also provide protection against asymptomatic SARS-CoV-2 infections are particularly meaningful as we look to disrupt the spread of the virus around the globe."

"Altogether, these data are critical to understanding the role of vaccination in combating the pandemic and provide hope to other countries dealing with this devastating disease, which has now afflicted the world for more than a year," Jodar added.

Researchers were not able to evaluate the vaccine’s effectiveness against the B.1.351 variant, originally detected in South Africa, due to a limited number of infections caused by the strain in Israel at the time, the companies said.

In January, Pfizer and the Israel Ministry of Health entered into a collaboration agreement to monitor and share data on the real-world impact of the COVID-19 vaccine.

The country has led the world with its vaccination campaign. As of this week, more than 52% of its population of 9.3 million has received one dose and almost 40% received two doses of the Pfizer vaccine, one of the highest rates per capita in the world.

Nearly 90% of the country's over-50 population has either been vaccinated or recovered from the coronavirus. With that high-risk population largely inoculated, decision-makers have begun to reopen many parts of the economy.

RELATED: Israel reopens bars, restaurants and other parts of economy to those fully vaccinated against COVID-19