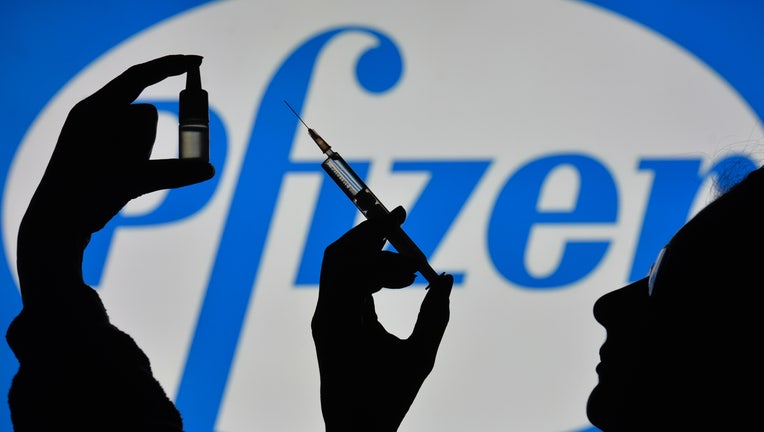 In this photo illustration a silhouette of a man holding a medical syringe and a vial seen displayed in front of the Pfizer logo on a screen. (Photo Illustration by Cezary Kowalski/SOPA Images/LightRocket via Getty Images)

WASHINGTON - The U.S. Department of Defense has awarded Pfizer, Inc. with a $3.5 billion contract to produce 500 million doses of the COVID-19 vaccine that will be donated internationally.

According to the contract, the estimated completion date is December 31, 2022.

The U.S. has recently beefed up its efforts to donate vaccines to other countries in an effort to quash the pandemic.

The White House announced on Tuesday that it has donated and shipped more than 100 million doses of the COVID-19 vaccine to more than 60 countries. Indonesia has received the highest amount of donations at 8 million doses.

RELATED: US has sent more than 110M vaccines to 60 countries, White House says

The Biden administration said in a statement that the donations to countries ranging from Afghanistan to Zambia are "just the beginning." At the end of August, the U.S. will also begin shipping 500 million doses of Pfizer-BioNTech’s COVID-19 vaccine to 100 low-income countries in need, officials said.

In June, President Joe Biden announced that he wanted to internationally donate and ship 80 million doses but fell short on delivering his promise when the month ended. It wasn’t for lack of doses. All the American shots were ready to be shipped, the White House said. Rather, it took more time than anticipated to sort through a complex web of legal requirements, health codes, customs clearances, cold-storage chains, language barriers and delivery programs. Complicating matters even further was that no two shipments were alike.

"What we’ve found to be the biggest challenge is not actually the supply — we have plenty of doses to share with the world — but this is a Herculean logistical challenge," White House press secretary Jen Psaki said in June.

Under Biden’s sharing plan, about 75% of U.S. doses are shared through COVAX, which aims to help lower- and middle-income nations, with the balance being sent to U.S. partners and allies.

RELATED: US hits vaccine milestone as 70% of US adults now have at least 1 dose

Several countries and continents are struggling with the vaccine supply. Less than 2% of the vaccines administered globally have been in Africa, according to the World Health Organization, while the Africa CDC says 29 of the continent’s 54 countries are now experiencing a "severe third wave" of infections.

Indonesia, the world’s fourth most populous country, had its deadliest day with 2,069 deaths from COVID-19 last Tuesday and fatalities remain high. As of Sunday, total official cases stood at more than 3.4 million with 97,291 deaths, though with poor testing and many people dying at home, the real figures are thought to be considerably higher.

As the region grapples with a new coronavirus wave fueled by the delta variant, Indonesia’s death rate hit a 7-day rolling average of 6.5 per million on Aug. 1, second only to Myanmar and far higher than India’s peak rate of 3.04 that it hit in May during the worst of its outbreak.

Philippine President Rodrigo Duterte is warning that Filipinos who refuse to get vaccinated against the coronavirus will not be allowed to leave their homes as a safeguard against the more contagious delta variant. Nearly 7 million Filipinos have been fully vaccinated and more than 11 million others have received their first dose. That is a fraction of the government’s target of 60 million to 70 million people.

Meanwhile, Pfizer-BioNTech is looking for the U.S. Food and Drug Administration to fully approve its vaccine. According to the Wall Street Journal, the agency will "sprint" to grant full approval.