PHILADELPHIA - A Philadelphia City Council member and his wife were indicted on fraud charges in what officials are calling a “widespread corruption conspiracy,” federal authorities said Wednesday.

Councilmember Kenyatta Johnson and his wife, Dawn Chavous, are charged with honest services wire fraud in a 22-count indictment.

Johnson, 46, a councilman since 2012, is accused of engaging in official actions in exchange for payments. Chavous, 40, is accused of having entered into a “sham” consulting agreement with a nonprofit that was used to funnel payments to her husband.

Johnson released a statement on the eve of the indictment Tuesday proclaiming his innocence and vowing to plead not guilty.

“First, let me be clear: I am innocent. I did nothing wrong,” he said. “I am the victim of overzealous federal prosecutors who have spent the last five years looking for something to charge me with.”

He also praised his wife, saying she “makes me a better man every single day.”

“I know that we will get through this together,” he said. 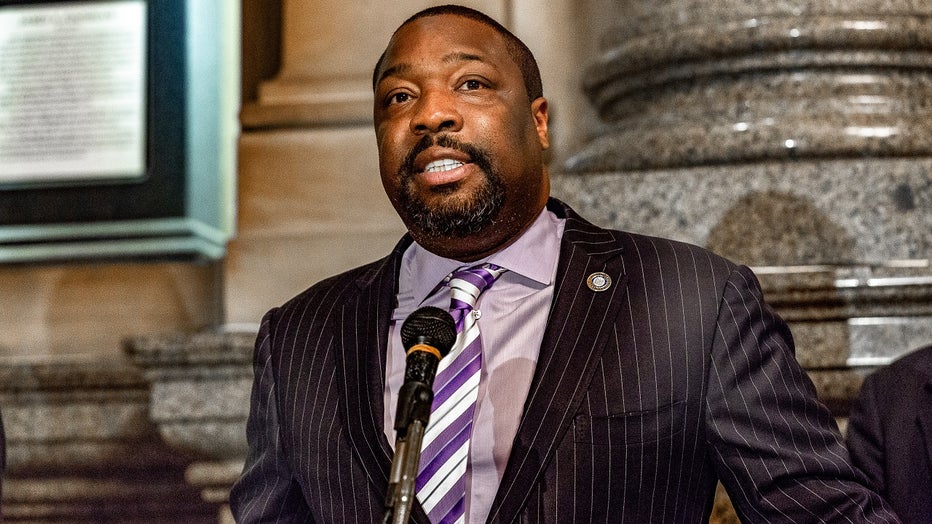 Williams alleged that the nonprofit, which was founded by music producer Kenny Gamble to improve Philadelphia communities through education, real estate and other realms, was “hijacked” by the pair “and turned into a criminal enterprise in order to commit these crimes of corruption and greed.”

Court documents do not list attorneys who could speak for Islam and Dawan. Messages seeking comment were left at possible phone numbers for those two defendants.

The businessmen are also charged in their dealings with a former Wisconsin school board president. Prosecutors allege that they “obtained corrupt and unfair advantage” in their business dealings over multiple years, Williams said.

The Milwaukee Journal Sentinel reported in May that former Milwaukee Public Schools board president Michael Bonds was convicted of accepting bribes for his votes to help a Philadelphia-based charter school company operate three schools in Milwaukee.