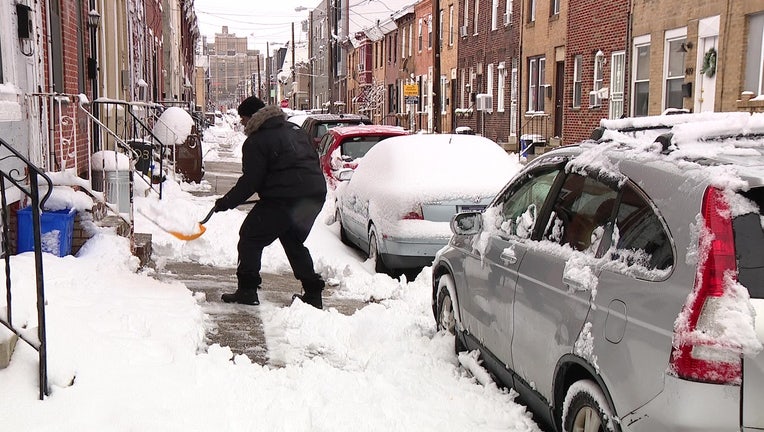 PHILADELPHIA - The City of Philadelphia has announced that a snow emergency will be in effect beginning at 7 p.m. Friday evening as a nor'easter is forecasted to bring several inches of snow to the region.

The emergency means all parked vehicles must be moved off of snow emergency routes for plowing purposes.

Streets Department crews will be fully deployed to respond to the snow, mobilizing over 400 pieces of equipment. Snow emergency routes, primary roads, and secondary roads will be serviced first to allow for safe passage, city officials say.

Beginning Friday at 7 p.m., the Philadelphia Parking Authority will be offering a 24-hour emergency parking in Center City garages for a flat rate of $5. To receive the discounted $5 rate, customers must bring their ticket and pay at the PPA Management Office in each garage.

A powerful nor'easter could bring upwards of a foot of snow to parts of the Delaware Valley Friday night and Saturday. Most of the area is expected to see several inches of snow as the storm moves up the coast.

According to city officials, the emergency will subsequently end at 5 p.m. as the city quickly adapts to the snow.

"Motorists should allow extra time, exercise patience and maintain safe driving distances. Black ice on the roadway remains an issue for vehicular traffic, and the region is still under a wind advisory, with the possibility of downed trees and power lines," said Acting Managing Director Vanessa Garrett Harley. "I would like to thank our Streets Department and all other agencies for their snow-fighting efforts and for working hard  to get our city back to normal business as quickly as possible."

Drivers are asked to allow for extra time and maintain safe following distances. Residents were also reminded to clear a three-foot wide path on sidewalks within six hours of the end of the storm, and to keep fire hydrants and street sewers clear.

Philadelphia has been one of the toughest areas for forecasters when it comes to predicting snow totals as a sharp cutoff is expected between light and heavy snow. Parts of the city are expected to see at least four inches if the snowfall is light, but could see 7 or more inches depending on the storm's track.

For more information on the snow emergency, click here.