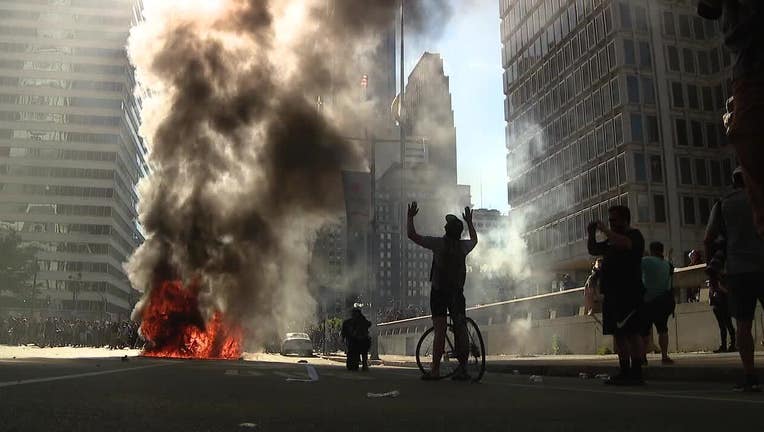 PHILADELPHIA - A judge ordered a woman accused of setting fire to two police cruisers after peaceful protest devolved into rioting last month in Center City to be held without bail.

Federal investigators say photos from the incident and information available online helped lead them to the suspect.

During the chaotic scene outside City Hall on May 30, Lore-Elisabeth Blumenthal is accused of torching a police cruiser and a sport utility vehicle. Investigators say video evidence shows Blumenthal take a piece of wood from an engulfed police cruiser and place it into an idle SUV, causing the vehicle to catch fire. As a result, both cars were destroyed. 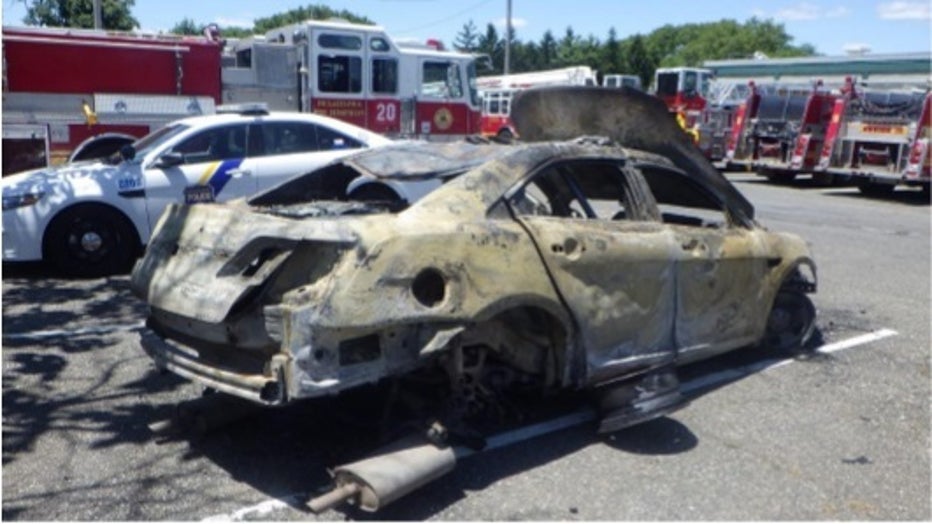 “We at the U.S. Attorney’s Office fully support the First Amendment right of the people to assemble peaceably and to petition their government," U.S. Attorney William McSwain said. "But torching a police car has nothing to do with peaceful protest or any legitimate message."

MORE: Officers, civilians hurt after a day of protests, riots, looting in Philadelphia

If convicted, Blumenthal faces a maximum possible sentence of 10 years in prison, followed by three years of supervised release, and a fine of up to $250,000.

A group of rioters damaged multiple police cars before setting them on fire in West Philadelphia.

The late May protests sparked by the police custody death of Geroge Floyd lead to violent rioting and looting that amounted to thousands in damages to private and city property. In the wake of the violence, police are trying to find and prosecute those responsible for the destruction.

“Anybody who engaged in such acts can stand by to put your hands behind your back and head to federal prison. We are coming for you," McSwain said.

According to court documents. FBI investigators were able to piece together video of the incidents obtained by law enforcement. Images they say show a woman hurling flaming objects toward a police cruiser were also obtained from social media users.

In their efforts to identify the suspect investigators magnified and cropped an image they say showed Blumenthal's peace sign tattoo on her right forearm. 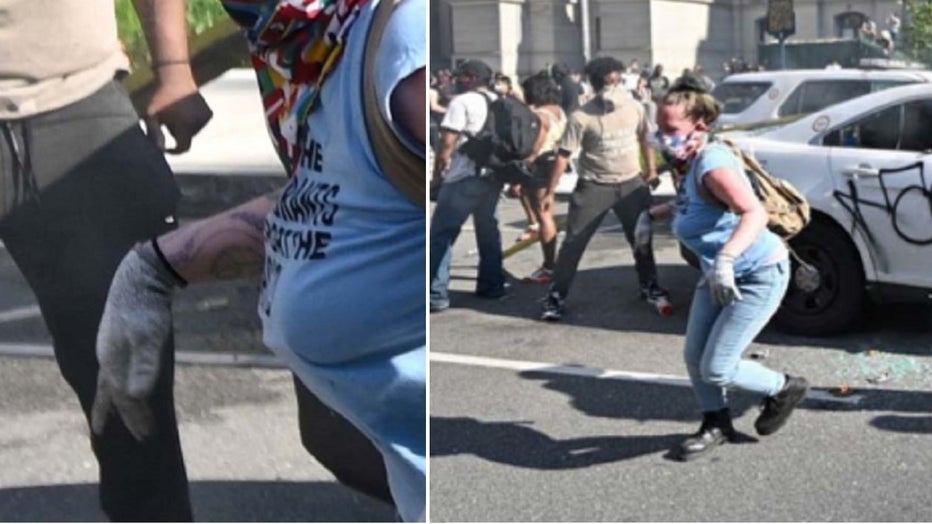 In addition to photo evidence, authorities were able to track the shirt Blumenthal was wearing on the day of the protests back to Etsy, where they say she purchased it. The shirt read "KEEP THE IMMIGRANTS, DEPORT THE RACISTS."

An online review allegedly left by Blumenthal led investigators to her other social media pages, including LinkedIn.

From that profile, authorities found that she was employed as a massage therapist. After searching her employer's website, authorities discovered multiple videos, including some that were several years old, showing a woman's right forearm with a peace sign tattoo identical to the one observed in the photos taken from the riots in Center City on May 30.

Authorities were then able to trace the phone number listed for Blumenthal on the company's website, department of motor vehicle records, and purchase records obtained from Etsy back her address in Philadelphia.

Blumenthal's attorney Paul Hetznecker released the following statement to FOX 29, "This is a ridiculous over-exaggeration. The FBI Joint Task Force showed up at my client's home in the early morning hours for a military style raid causing fear and panic among all of the residents inside. Verbally objecting to a forcible raid of one's home is a natural response. The government's attempt to demonize my client was completely rebutted by the more than 20 letters of support from friends and family attesting to a lifetime of compassion, empathy and responsible engagement. With only a summary conviction on her record over a decade ago Ms. Blumenthal is entitled to be released on bail. We will appeal the magistrate's decision."