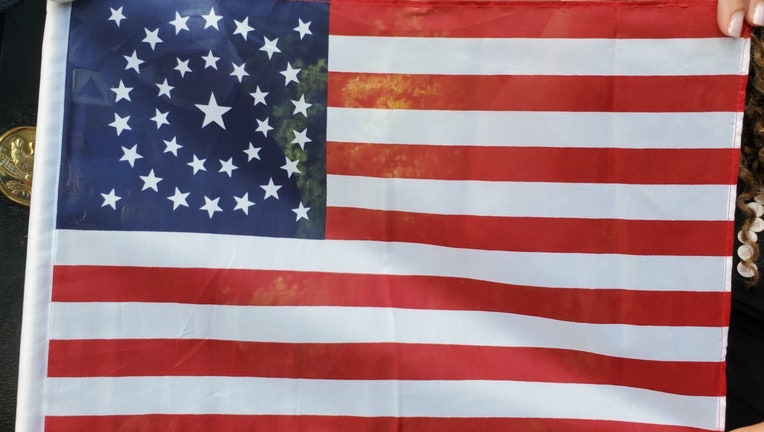 After the Emancipation Proclamation in 1863, over 200,000 African-American men were allowed enlistment for the Civil War. In Cheltenham Township, Camp William Penn housed the third regiment of the United States Colored Troops (USCT).

Eleven-thousand men resided in this camp that consisted of 11 regiments from both Philadelphia and New Jersey. A regiment was usually made up of about 1,000 men, according to the North Carolina Museum of History.

"We have the names of each one of them, their regiment, their company." Albert El, a reenactment participant, said.

El and other reenactors began their events by raising the Juneteenth flag at the Betsy Ross House, followed by another showing at the African American Museum. Throughout the day, all of the actors stopped and talked to Philadelphians who were unaware of the group's history.

"I learned that the colored troops had a flag to represent them. That was very educational," said Yvonne Sawyer of West Philadelphia.

The "colored" flag that Sawyer referred to was one of many flags of the USCT, representing the third of various regiments. El says that these flags are placed on the graves of each serviceman.

"A lot of people don't know that," he said. "It is done out of respect for them, and so people can't ignore who they were or what they've done."

Sawyer says she saw the group when she went to a Juneteenth parade in 2019 and wanted to learn more about who they were.

"We never really get a chance to learn our history. Pass your history down to your children. We have history all over the United States, and people just don't know. I'm still learning," she said.

As Juneteenth was a significant date in America's timeline, El says that everyone should know more than just the importance of this infantry and its impact but also their own family history.

This holiday allowed the opportunity for people like El to honor what their ancestors accomplished. To these reenactment participants, celebrating Juneteenth means recognizing the African-American men who fought for a country that barely acknowledged them as people.

"Our history is here. Don't look anywhere else. It's right here. Look within," El said.