FOX 29's Chris O'Connell is in Atlantic City where thousands of Phish fans packed the beach for three nights raising concerns that the event could become a 'superspreader.'

ATLANTIC CITY - Amid new concerns about the Delta variant, fans of the popular jam band Phish packed the beach in Atlantic City by the thousands for three nights over the weekend.

Concertgoers were not required to wear masks or show proof of vaccination to enter the outdoor venue, leading some to wonder if it will become a ‘superspreader’ event.

The Centers for Disease Control and Prevention (CDC) considers Atlantic County an area of high transmission. Last week the CDC said that more than 90% of counties in the country are experiencing "substantial or high" rates of transmission of the COVID-19 virus.

Atlantic County does not have mask guidance or limits on capacity limits outdoors. According to the latest data, the county as a rolling 7-day average of 63 new positive infections and COVID-19 attributed deaths have remained flat.

Some going to the concert on Sunday were even apprehensive about the threat of catching coronavirus. A vaccinated fan on Twitter speculated that he caught COVID at a Phish concert after noticing cold symptoms days later. 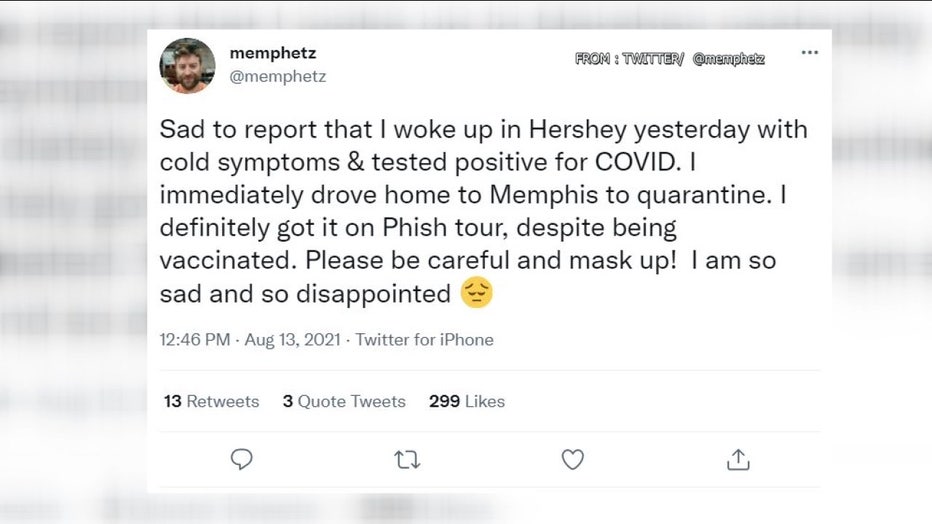 A vaccinated Phish fan speculated that he contracted COVID-19 at a Phish concert in Hershey.

"To be honest, I don't leave the house without worrying, but this is my first time back at a live concert," one fan said.

Following the band's three night stay in New Jersey Phish, like other bands and venues, will require that concertgoers show proof of vaccination to enter a concert.

Concertgoers at Lollapalooza in Chicago needed to show proof of vaccination or a negative COVID-19 test to enter. Two weeks later, Chicago health officials deemed that it was not a superspreader event that some feared it would become.

"There have been no unexpected findings at this point and NO evidence at this point of 'super-spreader' event or substantial impact to Chicago's COVID-19 epidemiology," Chicago Health Commissioner Dr. Allison Arwady said in a tweet.