Police in West Seneca, New York, said they dispatched their "two best dog whisperers" after receiving reports of a dog trapped under the foundation of a house.

WEST SENECA, N.Y. - Police in West Seneca, New York dispatched their "two best dog whisperers" after recieving reports of a dog named Buttercup trapped deep under the foundation of a house on August 2.

In the video, two officers are at the scene. One is digging a hole while the other is kneeling in attempt to get a glimpse of the trapped canine. The police department documented the rescue in a series of updates on Twitter.

"Buttercup somehow managed to make his way deep under the home’s foundation and can’t get out. Officer Rave is very concerned. Officer Pingitore is only concerned with looking cool," the police department tweeted.

Since Buttercup was out of reach, the police determined that digging a hole was "the only way out." Pingitore began digging while Rave lay on her stomach trying to gain access to the dog. 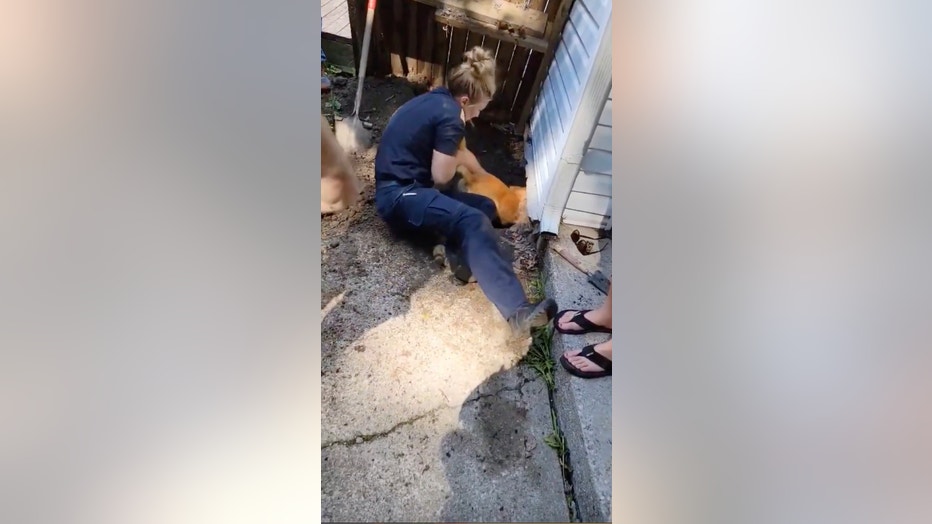 Since Buttercup was out of reach, the police determined that digging a hole was "the only way out."

"We’ve brought in the heavy machinery," police tweeted. "Not a precision machine though as he just shoveled dirt on Officer Rave’s head."

Pingitore passed a flashlight to Rave "like a relay baton" in a moment that police said was inspired by the summer Olympics.

After more digging, Rave reached her hand in and grabbed Buttercup, reuniting her with her owners.

The police tweeted that Buttercup is OK and that the department "appreciated everyone rooting for her during this harrowing rescue #savebuttercup."

West Seneca Police said Pingitore, who was shown in the video standing near Rave while she lay in dirt in attempt to reach Buttercup, would "make a great supervisor someday."