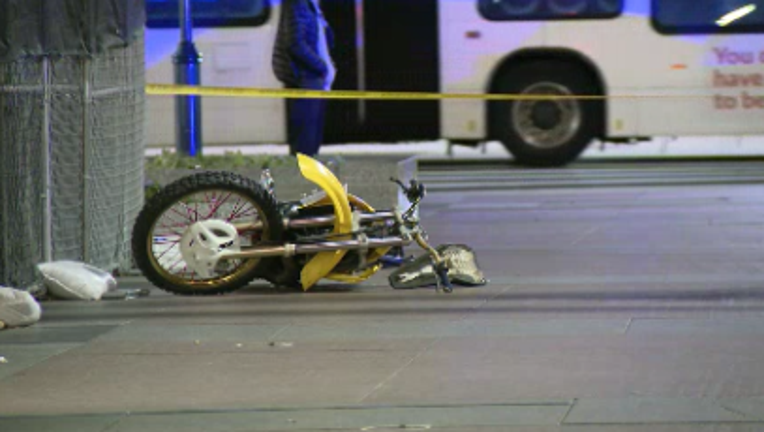 PHILADELPHIA - Philadelphia police are investigating a shooting that left a man dead across from City Hall in Center City.

It happened at 15th and Market streets Monday around 6:30 p.m.

Police say the 21-year-old victim was sitting on a yellow dirt bike when a white hatchback pulled up and a gunman got out and chased the victim on foot as he opened fire.

The victim, identified by police as Khaleaf Sistrunk, was shot in the face, neck, and chest. Sistrunk died at the hospital after he was rushed there by responding officers.

Investigators say at least 11 shots were fired from a semi-automatic weapon and the shooting was caught on surveillance cameras.

"There are numerous other cameras. There are police real-time cameras in the area and there are multiple other businesses in the area that do have cameras. We're pretty confident that we're gonna get additional angles and additional recordings," Chief Inspector Scott Small said.

Police are searching for a gunman described as between 5-foot-6 and 5-foot-9, who was wearing blue jeans and white sneakers.

Investigators say they will look into the possibility that road rage may have been a motive, but SEPTA Police say the victim was known to frequent the area where he was shot.