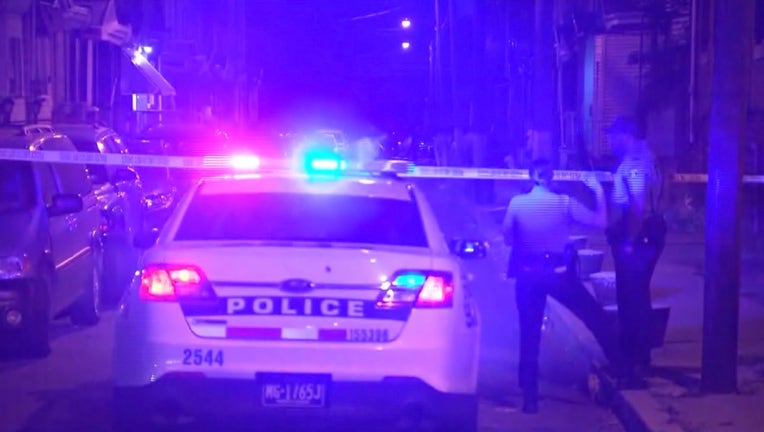 PHILADELPHIA - Investigators say two Philadelphia police officers were uninjured after they exchanged gunfire with a man during a chase through Hunting Park on Thursday.

According to the Philadelphia Police Department, two officers were patrolling the area of 9th Street and Hunting Park Avenue due to an increase in gunpoint robberies inside the park.

Just before 9 p.m., investigators say the officers spotted a man later identified as Naquan Burns near the southwest side of the park talking on his cellphone. Officer allegedly noticed a "bulge" on Burns' waistband and believed it to be a gun.

While still sitting inside a patrol car, police say officers questioned Burns about the bulge and he told them that it was his cell phone. According to investigators, Burns was already holding a cell phone during the conversation and an officer exited the patrol car.

Burns allegedly pulled a handgun from his waistband while back peddling away and pointed the firearm at the officers. Police say both officers fired at Burns but missed.

Officers chased Burns through the park and onto the 1300 block of Jerome Street where police say he hid between two parked cars. The officers took cover behind a parked car and told Burns to drop the gun, according to investigators.

Police say Burns suddenly popped up and fire once at the officers who returned fire and struck Burns once the right leg. Officers chased Burns to a property on Colwyn Street where police say he surrendered and dropped his weapon, which was later found to be a ghost gun.

Burns was taken to Temple University Hospital and listed in stable condition. No charges have been reported at this time.

Both officers have been placed on administrative leave during the investigation.

"I am thankful that no police officers or additional civilians were hurt during this incident, that a dangerous individual was placed into custody, and that another firearm--a ghost gun--was removed from our street," Commissioner Danielle Outlaw said.