Polk deputies say Nikita Lindsey sprayed department store employees with a chemical while she tried to steal a cart full of merchandise from a Davenport area Burlington Coat Factory.

DAVENPORT, Fla. - A Tampa woman is behind bars in Polk County after deputies said she went on a shoplifting spree, then sprayed store employees with a chemical while trying to get away.

When an employee offered to assist her, Lindsey reportedly warned her that she would "slap the glasses off of her face" if the employee didn't move, the arrest affidavit said.

Deputies said she then tried to push a shopping cart full of stolen merchandise out of the store, but the wheels locked. That's when they said she intentionally sprayed two of the employees with a chemical spray as she attempted to flee.

When several employees went outside, they said Lindsey turned her vehicle around and accelerated directly toward them.

A responding Polk deputy located Lindsey's Dodge Journey minivan and attempted to stop the vehicle, but said Lindsey instead accelerated, speeding through heavy traffic with her headlights off and ignoring a red traffic light. 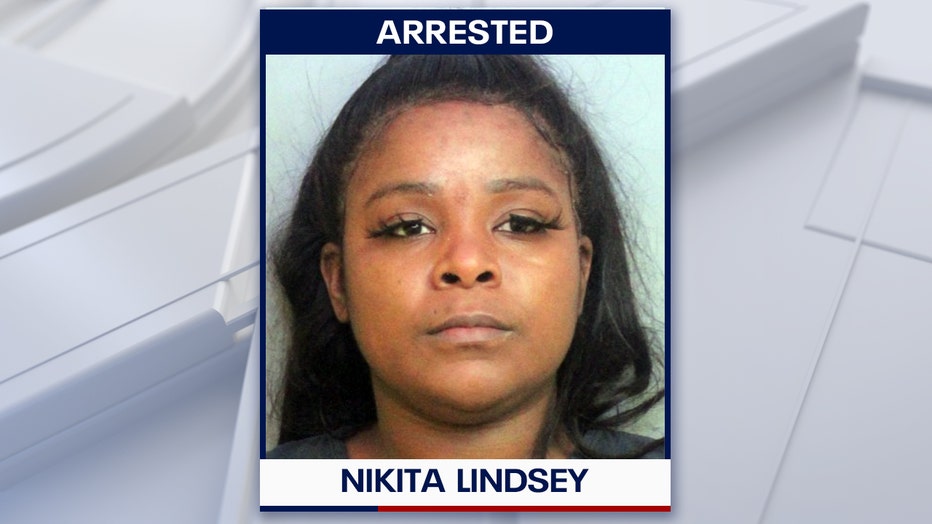 The deputy did not pursue the vehicle due to the amount of traffic, but investigators said the minivan was found abandoned with a flat tire.

Deputies managed to find Lindsey nearby as she was about to get into an Uber.

Detectives said Lindsey's minivan was loaded with suspected stolen items from various department stores, including Burlington, TJ Maxx and Ross. Many of the items still had price tags and anti-theft devices still attached. Investigators estimated the recovered merchandise was worth about $7,000.

"Nikita Lindsey is in the Polk County Jail right now without bond. She came to Polk County from Tampa to commit crimes here, so she can just stay here for a bit longer. And that’s a good thing," Sheriff Grady Judd said in a statement. "She’s a violent person with no consideration for the safety of others. She’s a dangerous person who needs to be kept away from the general public."

Deputies arrested Lindsey and charged her with multiple felonies, including three counts of aggravated assault with a deadly weapon, robbery with a weapon, fleeing to elude and possession of Alprazolam. She is also charged with driving with a suspended or revoked license, running a traffic light, operating a motor vehicle in the wrong direction, and operating a motor vehicle at night without headlights activated.

The sheriff's office said Linsey's prior criminal history consists of five felonies and 12 misdemeanors, including previous charges of robbery, aggravated assault with a deadly weapon, resisting, drug possession, and numerous charges for driving on a suspended or revoked license as well as violations of probation.