For the 50th anniversary of the Apollo 11 mission, NASA is giving people the opportunity to relive one of the most spectacular accomplishments of mankind in real-time through a new interactive multimedia experience.

WASHINGTON D.C. - For the 50th anniversary of the Apollo 11 mission to land men on the moon, ﻿NASA﻿ is giving people the opportunity to relive one of the most spectacular accomplishments of mankind in real-time through a new interactive multimedia experience — including all the jokes the astronauts told on board, the music they listened to, the messages they received from mission control, and the imagery they saw from space.

“Over half of the Earth's current population was not alive for the first Moon landing,” a ﻿release﻿ detailing the project said. “But, even those who had the opportunity to watch the Apollo 11 mission live on television in 1969 only had a limited view of all that was happening.”

The ﻿Apollo 11 Real-Time Mission Experience﻿ website consists of entirely original historical mission material but is re-imagined to reflect how the mission might be broadcast to the world if it happened today.

Apollo 11 traveled 240,000 miles in 76 hours before entering lunar orbit on July 19. The following day in mid-afternoon, the lunar module Eagle, carrying Neil Armstrong and Buzz Aldrin, detached from the command module, which Michael Collins remained aboard to man in lunar orbit. The team landed back on Earth in the Pacific Ocean on July 24. The whole mission took a little over eight days.

The Apollo 11 Real-Time Mission Experience project was built by software developer Ben Feist with the help of his collaborator, archivist Stephen Slater, over the course of two years. It includes many elements of the mission that weren’t even available to the people who worked the mission back in 1969, like a transcript of the music that Buzz Aldrin was playing in the 84th hour of the mission as Apollo 11 was approaching the moon (﻿83:48:57﻿). 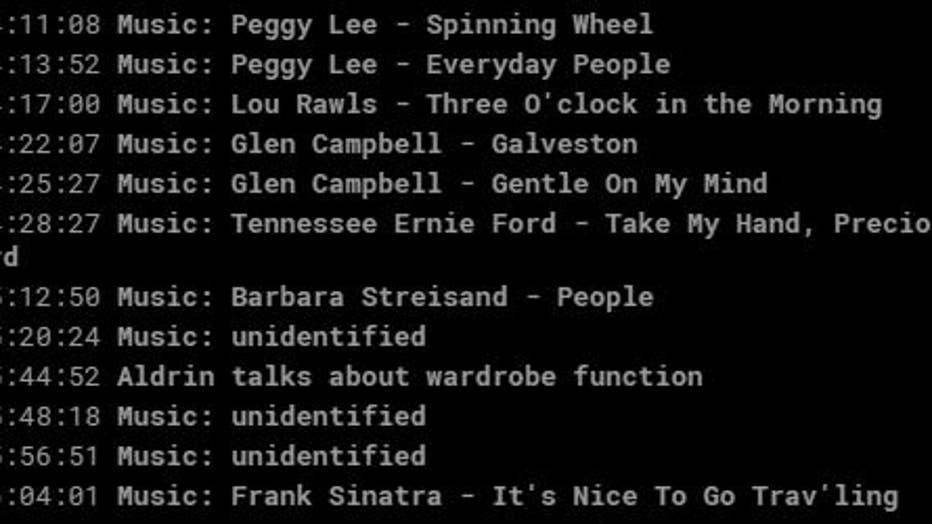 A transcript reveals the music that Buzz Aldrin played aboard Apollo 11 during the approach to the moon. (NASA)

Feist and Slater included a robust amount of media collected during the mission, including: all mission control film footage, all TV transmission and onboard film footage, 2,000 photographs, 11,000 hours of Mission Control audio, all onboard recorder audio, 15,000 searchable utterances, post-mission commentary and astromaterials sample data collected by Neil Armstrong and Buzz Aldrin on the moon’s surface.

From the landing page, users can either jump into the mission at T-minus one minute to launch, or they have the option to join the in-progress mission at the exact point it would have been 50 years ago.

One of the most difficult parts of the project was creating the Mission Control audio that we hear synced minute-by-minute in the project.

“The digitized analog tapes suffered from both high-speed variations and overall playback speed problems. It was looking like it would be impossible to sync them to mission time, but with the help of others, I was able to crack the case,” Feist said.

One of Feist’s highlights from the project was the morning delivery of Earth news that Mission Control gave to the astronaut team.

At (﻿95:16:25﻿), Mission Control deliver news about church services around the world mentioning Apollo 11 in their prayers, Aldrin’s son getting a tour of Mission Control with his uncle, and a cheeky report of an old Chinese fable.

Mission Control: “Among the large headlines concerning Apollo this morning, there's one asking that you watch for a lovely girl with a big rabbit. An ancient legend says a beautiful Chinese girl called Chang-o has been living there for 4,000 years. It seems she was banished to the Moon because she stole the pill of immortality from her husband. You might also look for her companion, a large Chinese rabbit, who is easy to spot since he is always standing on his hind feet in the shade of a cinnamon tree. The name of the rabbit is not reported."
Aldrin: “Okay. We'll keep a close eye out for the bunny girl."

Moments like these highlight what NASA calls “the ordinary roots of extraordinary feats.” In so many ways, the astronauts and technicians working the Apollo 11 mission were heroes, but they were also “very likable, regular people just doing a job,” as Feist put it.

At many moments in the audio, you can witness the awe that Armstrong, Aldrin and Collins felt as they traveled through space. As the team approached the moon and got its first view of the landing approach at (﻿76:34:34﻿), Armstrong says, “It looks very much like the pictures, but like the difference between watching a real football game and one on TV. There’s no substitute for actually being there.” 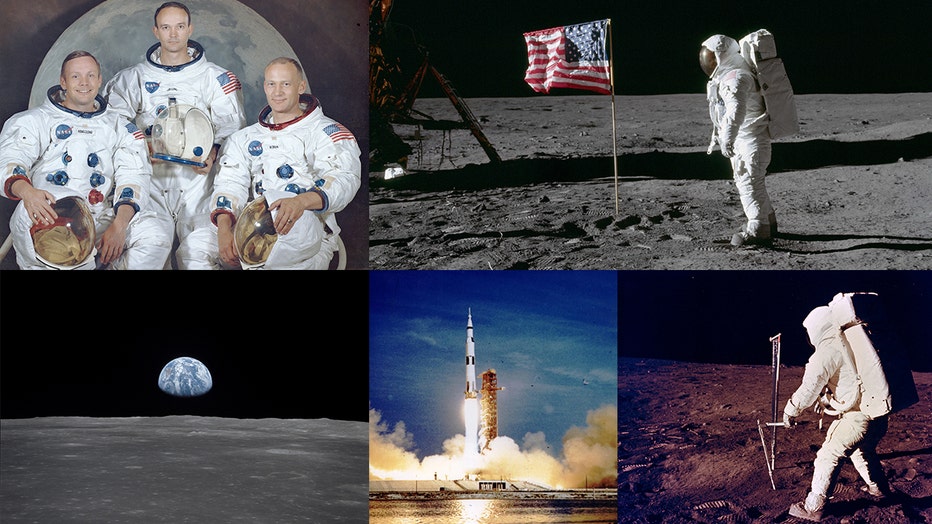 Major moments are available to witness like never before, like the launch of the rocket (﻿00:00:00﻿), the moment the lunar module Eagle landed on the moon and Armstrong said his famous lines, “The Eagle has landed,” and “That’s one small step for a man, one giant leap for mankind,” and the first steps on the moon (﻿109:23:40﻿).

“Beautiful view!” Aldrin exclaimed to Armstrong as they leave the Eagle to venture onto the moon’s surface at (﻿109:43:18﻿).

“Isn’t that something! Magnificent sight out here,” Armstrong responds.

The project allows viewers to dive into the Apollo 11 mission and to gain a small taste of what it may have been like to work the mission 50 years ago, but it will also serve as a reference for future crews and mission managers to be able to quickly and easily look back to moments during the Apollo 11 mission in order to gain insight for new missions.

“If you're a space aficionado, researcher, historian, or anyone else with a deep interest in the topic, it should deliver new insight,” Feist said, “If you're just mildly interested it should pull you in a little and show you what humanity can achieve when we collectively put our minds to it.”