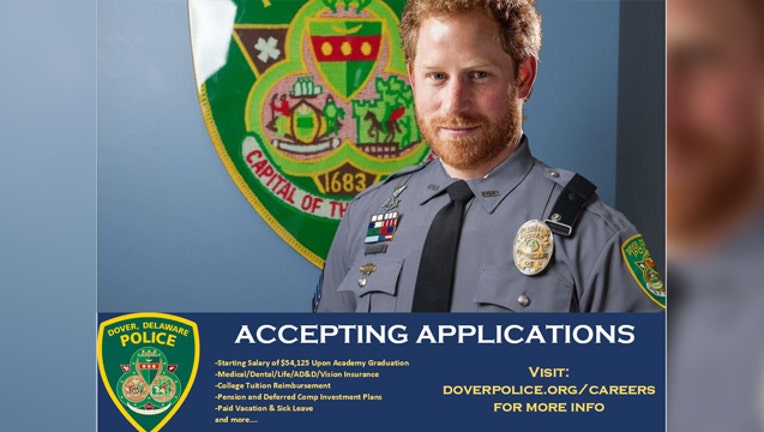 DOVER, Del. - A Delaware police department is making the most of the British Royal Family’s woes in order to attract new recruits

The Dover Police Department posted a photoshopped image of Prince Harry, also known as the Duke of Sussex, in a Dover Police uniform.

Officials shared the image one week after Harry and his wife, Meghan, the Duchess of Sussex, announced they were “stepping back” as senior members of the Royal Family and would “work to become financially independent”.

“Seeking financial independence? Ready to move out of Grand-Mum’s house?” a post on Dover Police Department read on Jan. 15. “We have a ROYAL opportunity for you! Dover Police is accepting applications for the 2020 hiring process!”

The announcement sparked a crisis among the Royal Family and prompted much speculation before The Queen organized a family meeting.

The meeting, which was held Monday, resolved with The Queen allowing Harry and Meghan the agency to continue with their plans to withdraw from royal responsibilities.

The post quickly went viral on Facebook and won praise from neighboring police departments. “Smashing job mate! Jolly good!” the Harrington Police Department wrote under the post, while the University of Delaware Police responded by saying the Dover Police Department had “won the internet for the day.”