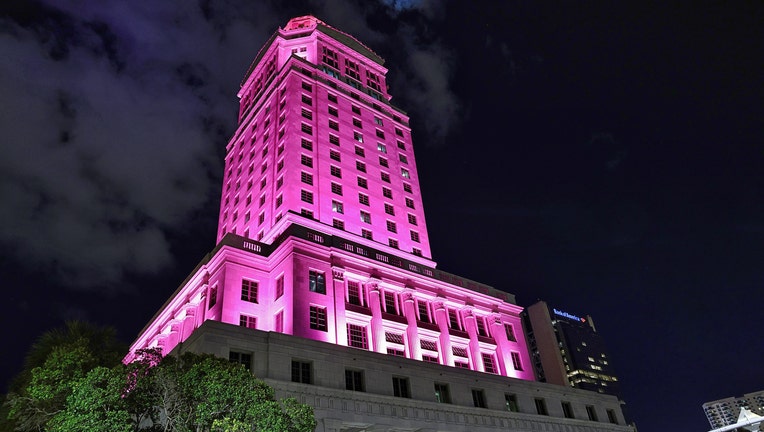 MIAMI (AP) - The Miami-Dade County Courthouse will begin undergoing repairs immediately because of safety concerns found during a review prompted by the deadly collapse of a nearby condominium building, officials said.

An engineering firm that examined the 28-story courthouse recommended that it undergo immediate structural repairs and that floors 16 and above be closed. All courthouse employees, including those who work on lower floors, will return to working from home, Miami-Dade Mayor Daniella Levine Cava and other leaders said in a joint statement late Friday.

In its report, engineering firm U.S. Structures Inc. said that during its June 30 inspection, it found structural distress in various structural members such as support beams and joists, including steel columns that are in "poor condition" and concrete columns that have numerous cracks.

"In general, we observed numerous members with visible signs of structural deterioration that have been documented and reported by this and other firms for quite some time now. Many of these members are in an advance state of deterioration," inspector Jose Toledo wrote in the firm’s Tuesday letter to Miami-Dade County officials.

The announcement about the courthouse, which is in Miami, came during the third week of the search for victims of the collapse of the Champlain Towers South building in nearby Surfside. On Saturday, authorities raised the confirmed death toll to 86, with 43 people still missing.

62 victims have been identified and 61 families or next of kin have been notified, while 43 people are unaccounted for.

The courthouse, which was completed in 1928 and placed on the National Register of Historic Places in 1989, is where most civil cases are heard and contains some administrative offices. Separate courthouses for criminal, children's and family cases are not affected.

Workers only recently returned to the building after working remotely because of the coronavirus pandemic. Court operations will go back to a remote format until the safety concerns are addressed. The court planned to notify people with upcoming court proceedings of the changes.

"They had only been back in that building about a week," Levine Cava said at a Saturday news conference. "So they have everything they need to continue to operate remotely and also at other locations, so it should not disrupt substantially."

Authorities didn't disclose details about the specific types of repairs that are needed, and they still plan to inspect its basement to determine if additional ones are required.

In its report, the engineering firm warned that one column on the 25th floor needed "immediate attention" and urged that it be repaired within 30 days. It also found overhead beams and slabs that had cracks and spalling, which is when pieces of concrete break off and potentially allow water in. In addition, it advised officials to remove heavy items such as books, office supplies and sandbags that were stored on upper floors.

Miami-Dade County is in the early stages of constructing a new civil courthouse and had been planning to sell the current one, which has been beset by leaks, mold and issues with its facade over the years. It's unclear how the new findings might affect those plans to sell the building.

The building underwent a review following the June 24 collapse of the Champlain Towers South building, where efforts are ongoing to recover the bodies of those missing and presumed dead. Levine Cava said those efforts would continue throughout the day Saturday despite bad weather, though work was paused for about an hour Saturday morning due to a nearby lightning strike. She also said no asbestos has been found during the search of the rubble.

"Please pray for all those who’ve lost loved ones and for those whose hearts are broken by this unspeakable tragedy," she said.

Surfside Mayor Charles Burkett said crews were making good progress, especially in clearing debris from the section of the building that didn’t collapse but was later demolished. That section will likely be cleared sooner than originally expected, he said.

"It’s astounding the pace at which they’re working in getting that rubble out of there," he said.

Several other buildings have been reviewed to search for any structural concerns, and some — such as a condo building in North Miami Beach — have been evacuated.