Yes, people are peeing in the pool

A team of researchers in Canada seemed to confirm the notion that “everybody” pees in the pool.

LOS ANGELES - As summer approaches, it's time to remind everyone about the gross fact that, yes — people are peeing in the pool.

About one in five American adults admitted in a survey to having peed in the pool. U.S. Olympic swimmer Michael Phelps even confessed back in 2012 that peeing in the pool is an acceptable thing to do.

"I think everybody pees in the pool," Phelps told the Wall Street Journal. "It's kind of a normal thing to do for swimmers. When we're in the pool for two hours, we don't really get out to pee. We just go whenever we are on the wall.

He added, “Chlorine kills it, so it's not bad."

A team of researchers in Canada seemed to confirm the notion that “everybody” does it. And as it turns out, the chlorine might not “kill it” as much as Phelps thought.

The study used acesulfame potassium (ACE), an artificial sweetener found in many processed foods, as a marker for urine in the water. ACE passes through the body unaltered and is excreted in the urine.

An analysis of 31 pools and hot tubs found the sweetener — or evidence of urine — in every single one.

“Our study provides additional evidence that people are indeed urinating in public pools and hot tubs,” study co-author Lindsay Blackstock, a graduate student at the University of Alberta, Edmonton, told the Guardian.

Blackstock added that were was “no other explanation for that (substance) to be present in the pools.”

The researchers conducted the study in an effort to raise awareness about the risks of relieving oneself in a swimming pool.

“We want to use this study to promote public education on appropriate swimming hygiene practices,” Blackstock told the Guardian. “We should all be considerate of others and make sure to exit the pool to use the restroom when nature calls.” 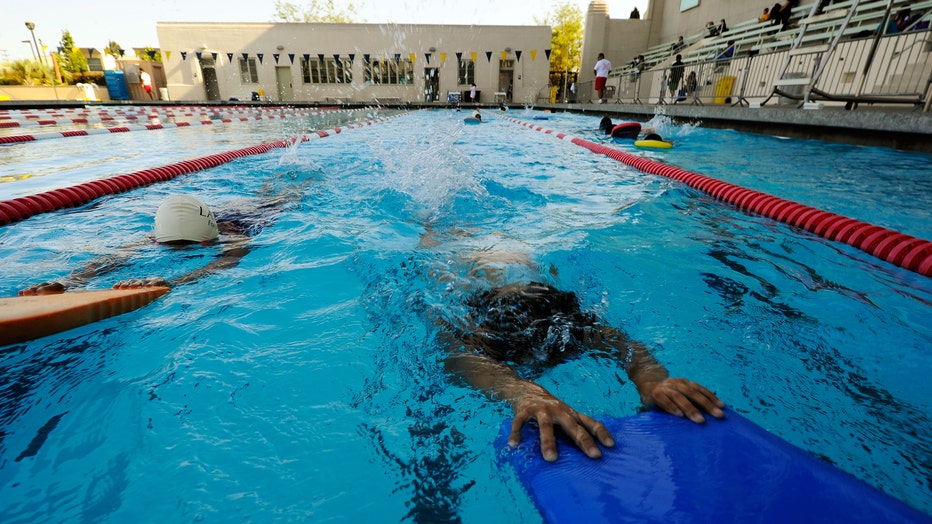 Adults and children swim in a pool in this file photo taken on May 20, 2010 in Los Angeles, California. (Photo by Kevork Djansezian/Getty Images)

Although urine is sterile, it can lead to eye, skin and respiratory problems when mixed with pool chemicals, according to health officials.

And here's something even more gross to consider: That strong “chlorine” aroma that sometimes hits your nose when you walk by a pool is not the smell of chlorine, but rather evidence of trouble.

When chlorine mixes with pool contaminants, such as urine, sweat and body-care products, a strong smell is released, according to the Water Quality and Health Council. A “healthy pool” is one with little to no odor.

“The poolside pronouncement of 'too much chlorine in the pool' may be more aptly described as 'too much peeing in the pool,'” the Water Quality and Health Council says on its website.

According to the U.S. Centers for Disease Control and Prevention, there have been an increase in “recreational water illnesses” over the past two decades, which are caused by germs in swimming pools, hot tubs, lakes, rivers, or oceans.

Although chlorine and other disinfectants are an effective way to kill germs found in swimming pools, they do not work instantly, the CDC says.

“The mixing of chlorine with pee and sweat uses up the chlorine in the pool, which would otherwise kill germs,” the CDC states on its website.

And while we're in the business of dispelling pool myths, the one often used by parents to keep their children from peeing in the pool isn't true either.

The Water Quality and Health Council found that nearly half of Americans surveyed incorrectly believe there is a chemical that can change the color of pool water in the presence of pee. There is currently no such urine indicator dye that exists.

“Chlorine and other disinfectants are added to a swimming pool to destroy germs. Peeing in a pool depletes chlorine and actually produces an irritant that makes people’s eyes turn red,” said Michele Hlavsa, chief of the CDC’s Healthy Swimming Program. “The solution isn’t rocket science; it’s common courtesy. Swimmers should use the pool to swim, the restroom to pee, and the showers to wash up before getting in the pool. It’s that simple.”