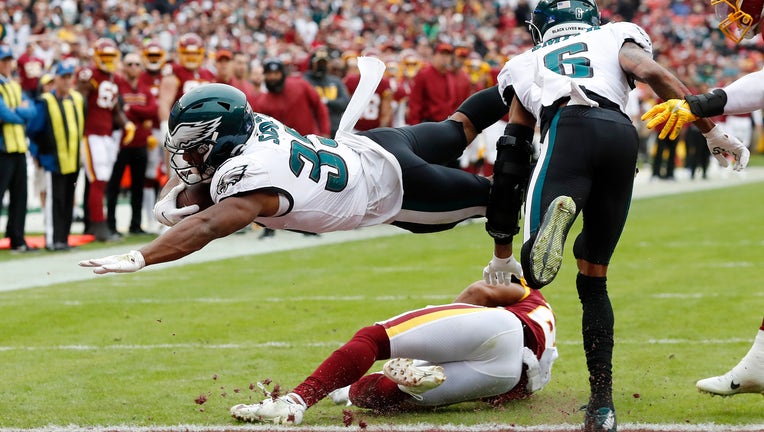 LANDOVER, MARYLAND - JANUARY 02: Boston Scott #35 of the Philadelphia Eagles dives into the end zone for a touchdown during the third quarter against the Washington Football Team at FedExField on January 02, 2022 in Landover, Maryland. (Photo by Todd

WASHINGTON - Jalen Hurts scrambled out of trouble while showing no ill effects from a recent ankle injury, Boston Scott rushed for two touchdowns, and the Philadelphia Eagles held on to beat Washington 20-16 Sunday to move one step closer to the playoffs.

Hurts ran six times for 45 yards and was 17 of 26 passing for 214 yards in leading the Eagles to a fourth consecutive victory. Pending other results around the NFL, they could have an NFC wild-card spot locked up by the end of the night.

Philadelphia (9-7) started slowly yet again, and its league-leading rushing attack was held to a season-low 3.4 yards a carry with Miles Sanders out because of a broken left hand. Twelve days after racking up 238 yards on the ground against Washington (6-10), the Eagles had 119 yards rushing.

But the defense finally got to Taylor Heinicke, and the Eagles wore down a banged-up opponent, erasing a 16-7 deficit. Jake Elliott connected on field goals of 42 and 41 yards in the fourth quarter, and Rodney McLeod picked off Heinicke in the end zone with 24 seconds remaining to seal it.

Philadelphia will make the postseason for the first time since 2019 if Minnesota loses at Green Bay and either New Orleans loses to Carolina or San Francisco beats Houston.

Heinicke flashed some of his trademark elusiveness, evading pressure during a big fourth quarter, but threw an interception for the fifth consecutive game after leading Washington to the Philadelphia 20-yard line.

Ravaged by injuries and virus-related absences, Washington's faint playoff hopes came to an end with a home loss that felt more like Lincoln Financial Field because of all the Eagles fans in attendance. It's the team's fourth consecutive loss after winning the previous four games.

Scott’s second touchdown gave the Eagles 24 scores on the ground this season. That’s the most in the league and the organization’s most in a season since 1949.

Eagles: Right guard Nate Herbig injured his left ankle late in the second quarter but returned in the third. ... LB Shaun Bradley was inactive because of a shoulder injury.

Washington: Tight end Ricky Seals-Jones injured his neck in a nasty collision with a camera operator on the sideline in the second quarter. Seals-Jones had his neck stabilized before he was lifted onto a stretcher and carted off. The cameraman had a cut on his nose but continued to work.

Washington: At the New York Giants next Sunday.