The U.S. Supreme Court has overturned the Roe vs. Wade landmark case that legalized abortion nationwide, which will likely leading to many states enacting restrictive laws or full abortion bans. Protesters had gathered outside the Supreme Court in anticipation of the 6-3 ruling. The court went down ideological lines, with Chief Justice Roberts concurring with the five other conservative justices.

BOSTON - The Supreme Court decision overturning Roe v. Wade and ending constitutional protections for abortion hews closely to the leaked draft opinion that was published in May.

Key passages in Justice Samuel Alito's draft opinion and the final ruling released Friday are identical, including sharp denunciations of the Roe ruling as "egregiously wrong," with "exceptionally weak" reasoning and "damaging consequences."

The major additions to the final copy are pointed rebukes of the dissent from the court's three liberal justices as well as a concurring opinion from Chief Justice John Roberts, who said he would have upheld the Mississippi law at the heart of the case, but would have stopped short of ending the right to an abortion.

The draft opinion, labeled a "1st Draft" of the "Opinion of the Court" and published by Politico, was leaked in a nearly unprecedented breach of protocol that sent shockwaves through the country. The marshal of the Supreme Court is investigating what Roberts has described as "egregious breach of trust." 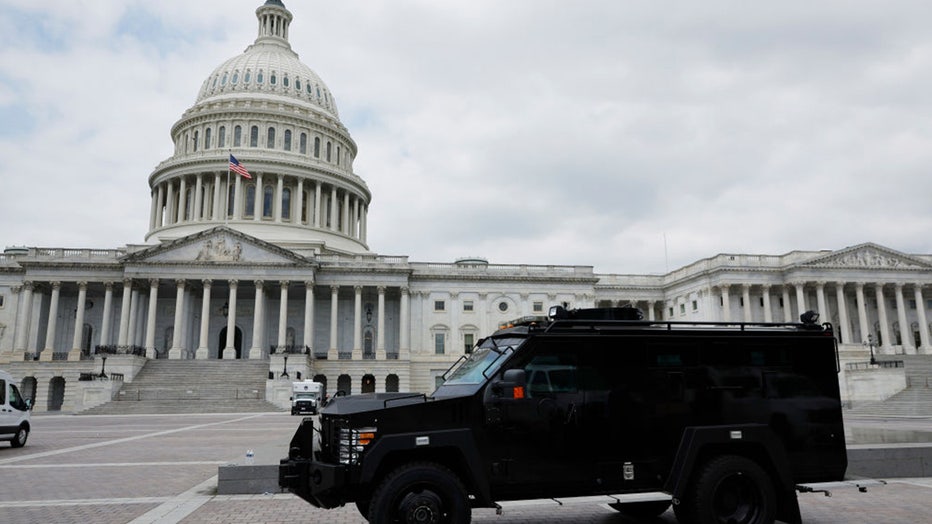 An armored police vehicle is positioned on the plaza between the U.S. Capitol and the Supreme Court after the court handed down its decision in Dobbs v Jackson Women's Health on June 24, 2022 in Washington, DC. (Chip Somodevilla/Getty Images)

Here's a closer look at the similarities and differences between the draft and final opinions:

The central arguments in the draft and final opinions are fundamentally the same. Alito writes that the 1973 Roe decision and Planned Parenthood v. Casey, the 1992 decision that reaffirmed the right to abortion, used flawed reasoning to conclude that the Constitution protects the right to an abortion.

Alito writes that the Constitution "makes no reference to abortion" and that the due process clause of the Fourteenth Amendment does not protect such a right. While that provision guarantees some rights that are not named in the Constitution, those rights have been "deeply rooted in this Nation's history and tradition," Alito wrote. Abortion has not been, he argues.

"It is time to heed the Constitution and return the issue of abortion to the people's elected representatives," he wrote.

Critique of the dissent

The first major addition to the final opinion comes on page 35, when Alito launches into a critique of the liberal justices' dissent, which he would not have had access to when he wrote his draft.

Alito writes that the dissent's failure to acknowledge the nation's long tradition — before Roe — of outlawing abortion is "devastating to its position." The right to an abortion does not have any foundation, "let alone a ‘deeply rooted one,'" in American history, Alito argues. He points, among other things, to the fact that at least 46 states by the late 1950s banned abortion "however and whenever preformed" unless necessary to save the life of the mother.

Alito writes that the most "striking feature" of the dissent is the lack of "any serious discussion of the legitimacy of the States' interest in protecting human life." The liberal justices, Alito argues, discuss issues like the burdens of motherhood, which he says are "important concerns." But they display "no similar regard for a State's interest in protecting prenatal life," he writes.

Later in the opinion, Alito rebukes the liberal justices' argument that in overturning Roe, the court has abandoned stare decisis: the legal principle that judges use to base decisions on earlier ones. Alito responds: "We have done no such thing."

"Precedents should be respected, but sometimes the Court errs, and occasionally the Court issues an important decision that is egregiously wrong," Alito wrote. "When that happens, stare decisis is not a straightjacket."

The other difference between the draft and final opinion is a takedown of the argument made by Roberts, who voted with the majority to uphold the Mississippi law banning most abortions after 15 weeks, but wrote separately that there was no need to overturn the broad precedents to rule in Mississippi’s favor.

Roberts writes that he would "leave for another day" the question of whether Roe should be overturned and "take a more measured course." Roberts said he would do away with the "viability line" — or prior holding that the Constitution protects the right to an abortion up until the point of when a fetus is viable outside the womb. He writes that the right to an abortion should "extend far enough to ensure a reasonable opportunity to choose, but need not extend any further — certainly not all the way to viability."

Alito argues that there are "serious problems" with Roberts' approach. If the court were to only go so far as to uphold Mississippi's law, it would "soon be called upon to pass on the constitutionality of a panoply of laws with shorter deadlines or no deadline at all," Alito writes.

The chief justice's "quest for a middle way would only put off the day when we would be forced to confront the question we now decide," Alito wrote. "The turmoil wrought by Roe and Casey would be prolonged. It is far better — for this Court and for this country — to face up to the real issue without further delay."