'Float acted like a sail': Boy on unicorn float drifts out to sea

Oak Island Water Rescue officials said the boy did “an amazing job” of staying calm and remaining on the unicorn float.

OAK ISLAND, N.C. - An 8-year-old boy on an inflatable unicorn raft drifted nearly half of a mile out to sea before being rescued.

The boy was visiting from Ohio with his family and in “just a few seconds” was swept away from the shore on June 3, according to local affiliate WWAY-TV.

“The float was right there, in easy reach, and then just in the blink of an eye, it was beyond the breakers and too far for them to reach,” Oak Island Water Rescue Chief Tony Young told the station.

Officials said the normal wind pattern blows from the ocean toward the shore, but on the day of the rescue, there was a strong wind blowing from the sand toward the water. 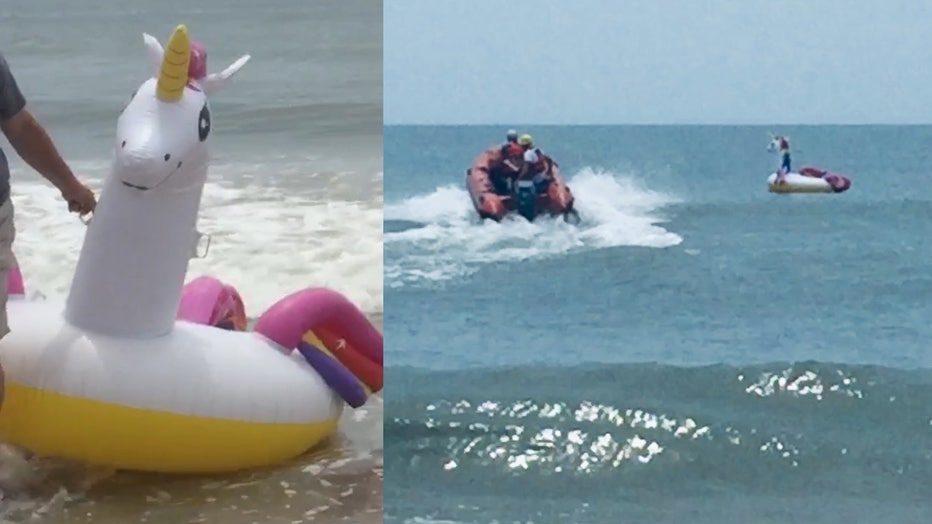 The boy was visiting Oak Island, N.C. from Ohio with his family and in “just a few seconds” was swept away from the shore. (Photo credit: Oak Island Water Rescue)

The wind suddenly pushed the raft from shallow water to deeper water, according to a post on the Oak Island Water Rescue Facebook page. Rescuers said once the unicorn raft made it past the waves, the giant float “acted like a sail” and the unicorn continued to float away from the beach.

"From all accounts, it sounds like there was adequate supervision in place,” the post said. “Sometimes things happen so quickly that being even a few feet away isn’t close enough to prevent an emergency. Just a few seconds is all it takes.”

At least one person attempted to rescue the boy from the sand. The family immediately called 911 when they realized they couldn’t reach him and told him to stay on the float, according to WWAY-TV.

“A lot of the time, people get in trouble if they abandon ship and try to swim back,” Young told the station.

When crews arrived, they said the float was difficult to see from the beach and estimated it to be about a quarter-mile to a half-mile off the coast.

Oak Island Water Rescue officials said the boy did “an amazing job” of staying calm and remaining on the unicorn float. Once a rescue boat reached him, the boy told the crew “not to pop the unicorn float or they would get in trouble.”

“Handing that little kid back to his mom after we brought him in from way out in the ocean on that float was payment enough for all of us,” Young told WWAY-TV. “I’m sure I speak for the whole team when it comes to that.”