This footage, showing the possible tornado, was recorded by Shana Hodge shortly after noon on March 17. Hodge said it was filmed on Highway 84, about 20 miles east of Laurel, in Wayne County. (Credit: Shana Hodge via Storyful)

More severe thunderstorms and tornadoes are possible Thursday for parts of the southeastern U.S. after a wave of storms pounded the region Wednesday, leaving damaged buildings, splintered trees and power outages for many.

Scattered severe thunderstorms are expected for portions of eastern Georgia, through the Carolinas into extreme southeast Virginia, according to the National Weather Service’s Storm Prediction Center. All severe hazards are possible.

Other isolated severe storms are possible from southern Ohio into the central Appalachians. 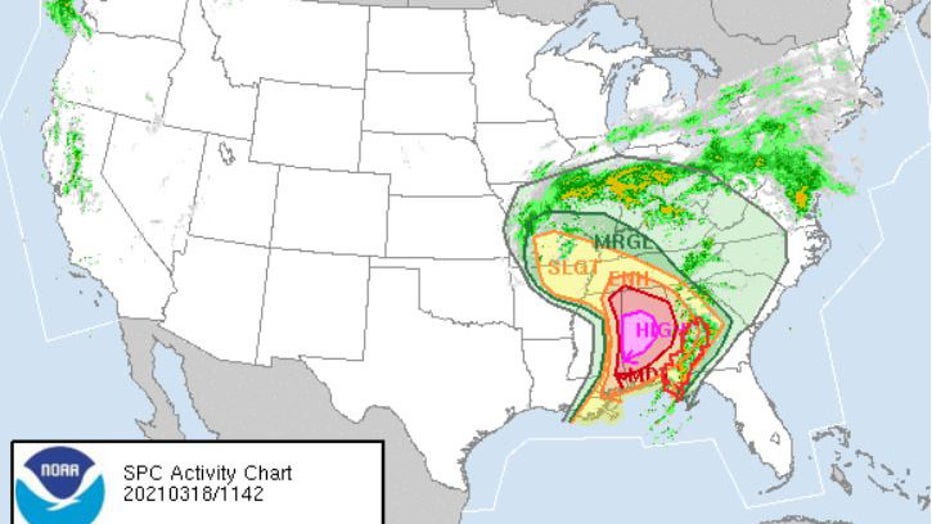 Scattered severe thunderstorms are expected Thursday from portions of eastern Georgia, through the Carolinas into extreme southeast Virginia, according to the National Weather Service's Storm Prediction Center. All severe hazards are possible. (Photo

Severe storms and tornadoes were possible from east-central Georgia and northeast across South and North Carolina later in the day Thursday.

Several preliminary reports of tornadoes were tracked across five states on Wednesday, the prediction center said. Many were located in Alabama and Mississippi, leaving behind a trail of damage.

RELATED: Multiple twisters touch down in Alabama, Mississippi as wave of tornadoes moves through South

Possible tornadoes knocked down trees, toppled power lines and damaged homes in rural Chilton County and the Alabama communities of Burnsville and Moundville, where power was out and trees blocked a main highway.

Residents in the storm’s path were advised to take cover and to take official warnings seriously.

The National Weather Service warned people in the Demopolis area of Alabama to take cover as a storm moved through on March 17, bringing a tornado threat.

Additional damage was reported in Louisiana, Tennessee and Mississippi, where video showed an apparent tornado at Brookhaven. High winds blew down signs and trees in northeast Texas, and hailstones the size of baseballs were reported near the Alabama-Mississippi line, the weather service said.

More than 70,000 homes and businesses were without power from Texas to Alabama on Wednesday evening. Nearly 18,000 remained without power Thursday morning in Alabama, according to PowerOutage.US, which tracks utility reports.

Dozens of school systems in Alabama, Louisiana and Mississippi canceled classes Wednesday, switched to online learning or dismissed students early, and Mississippi State University moved to virtual teaching because of the potential for danger at its campuses in Starkville and Meridian.

Large vaccination clinics where hundreds of people an hour can get shots without leaving their vehicles were canceled in Alabama, Mississippi and Tennessee. In the Mississippi capital of Jackson, state employees were warned to head to stairwells if they hear weather sirens. Near Birmingham, labor organizers canceled an outdoor event at an Amazon facility where workers are voting on union representation.

In the metro Atlanta area, the impending weather already caused some schools, government offices, and businesses to close, delay or change plans for Thursday, according to FOX 5. Intense lightning, heavy rain and strong wind gusts of up to 40-50 mph were moving through the area. A Tornado Watch was issued through the morning for several counties south of Atlanta.

Morehouse College tweeted that it was delaying the opening of its campus until 11 a.m. and that faculty and staff should not arrive until after that time. All classes before then were to be held virtually, it said.

"People in the affected areas need to make sure that they have a severe weather safety plan that includes where to take shelter in the event a severe storm approaches, and have more than one way of receiving severe thunderstorm and tornado warnings," Bunting said.

"A NOAA Weather Radio can be programmed to alert you when warnings are issued for your county or parish, and can wake you up if the storm occurs when you are sleeping," Bunting continued. "It's very important to have thought about safety before the warnings are issued."

This story was reported from Cincinnati. Meteorologist Stephanie Weaver and the Associated Press contributed.