LOS ANGELES - Anticholinergic drugs are often prescribed to treat a wide range of conditions, including depression, overactive bladder and allergies. But a new study suggests that some of these medications may increase the risk of dementia for adults 55 and older.

Researchers wrote that the risk was associated with 1,095 daily doses within a 10-year period, which is equivalent to an older adult taking a strong anticholinergic medication daily for at least three years.

Anticholinergics are a type of medication that blocks a neurotransmitter in the brain, called acetylcholine, from entering the nervous system. Acetylcholine transfers signals between certain cells that affect how your body functions.

Because anticholinergics can affect a variety of functions, including digestion, urination, salivation and movement, it can help treat many conditions, according to Medical News Today. 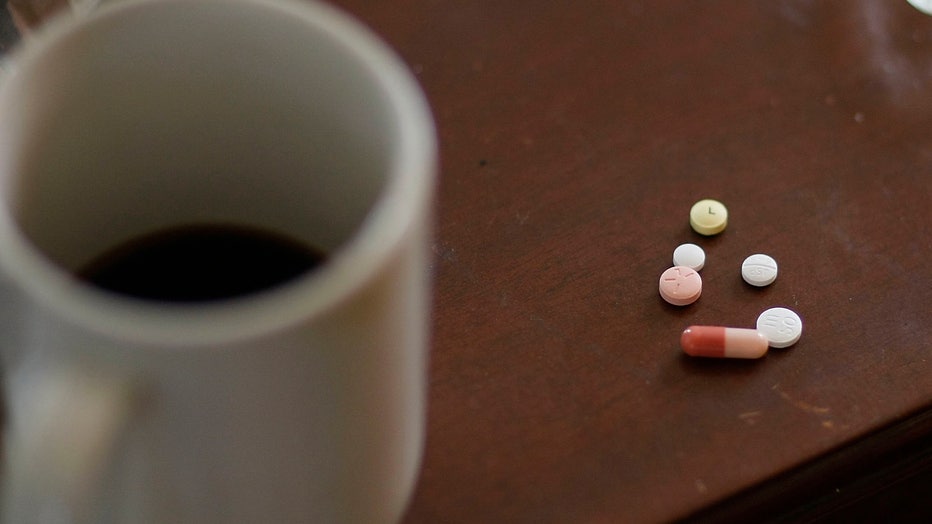 Prescription pills are shown on a table in this 2009 file image. (Photo by Joe Raedle/Getty Images)

Researchers noted in the study that these drugs are known to cause short-term side effects in older people, including confusion and memory loss, but it is less certain whether long-term use increases the risk of dementia.

"The study is important because it strengthens a growing body of evidence showing that strong anticholinergic drugs have long term associations with dementia risk," study author Carol Coupland, professor of medical statistics in primary care at the University of Nottingham, told CNN.

"It also highlights which types of anticholinergic drugs have the strongest associations. This is important information for physicians to know when considering whether to prescribe these drugs," Coupland added. "This is an observational study so no firm conclusions can be drawn about whether these anticholinergic drugs cause dementia."

The study authors warned people against stopping any of their medications without talking to their doctor first.

In the study, researchers examined medical records of nearly 59,000 patients in the United Kingdom with dementia, as well as a control group of more than 225,574 patients without the diagnosis. All of the patients were 55 and older.

The most frequently prescribed anticholinergic drugs were antidepressants, drugs to treat vertigo, motion sickness or vomiting and bladder antimuscarinic drugs, the study noted.

After accounting for other risk factors for dementia, researchers concluded that some strong anticholinergic meds were associated with the increased risk.

Researchers said that there were no “significantly increased risks” associated with antihistamines, gastrointestinal antispasmodics, antimuscarinic bronchodilators, antiarrhythmics, or skeletal muscle relaxants, according to the study.

“Although we believe that articles such as Coupland (and others) add value to the body of literature describing the association between strong anticholinergic medications and (Alzheimer disease and related dementias), they provide only incremental new knowledge and require additional research to clarify whether anticholinergic medications truly represent a reversible risk factor,” wrote Noll Campbell, Richard Holden and Dr. Malaz Boustani in an “invited commentary” piece also published Monday in JAMA Internal Medicine.

An estimated 47 million people worldwide were living with dementia in 2015, while in the United States around 5.7 million people have Alzheimer’s dementia, according to the study.