FOX 29's Lauren Johnson reports on the “flesh-eating” bacteria, Vibrio vulnificus, cases of which have been reported from the Delaware Bay.

NEW JERSEY - Cases of infection from the “flesh-eating” bacteria, Vibrio vulnificus, are on the rise in coastal regions where the bacteria are not normally found, and a team of researchers hailing from New Jersey and Pennsylvania believe it has to do with rising ocean temperatures.

The case study series, which was published in the Annals of Internal Medicine today, examined five separate cases of V. vulnificus necrotizing fasciitis that presented at a hospital in New Jersey during the summers of 2017 and 2018.

In the prior eight years, the hospital had only seen one case, senior author Dr. Katherine Doktor, told Medscape Medical News.

What's more — the bacteria wouldn't normally be found as far north as they were in the Delaware Bay that hugs New Jersey's southern coast because the water has historically been too cold. V. vulnificus typically favors warmer water and is endemic to oceans off the southeastern coast of the U.S., which has caused scientists to blame the uptick in recent infection cases partially on climate anomalies and increasing ocean temperatures.

Infection by the Vibrio vulnificus bacteria leads to necrotizing fasciitis, an inflammatory infection of the fascia that progresses rapidly, characterized by widespread necrosis of subcutaneous tissue and fascia — in other words, it deteriorates the infected person's skin and tissue. Though these infections can be hard to detect at first, they can result in the need for amputation and can even be fatal if left untreated.

Those with compromised immune systems and those with broken skin are more susceptible to such infections when swimming in the ocean.

All five cases of V. vulnificus necrotizing fasciitis included in the case series occurred in men between 38 and 64 years of age, four of whom had either been exposed to the water in Delaware Bay or eaten crabs caught in that region. The fifth man reported having worked at a seafood restaurant in New Jersey, though he claims to have neither eaten crab caught in Delaware Bay nor come into direct contact with ocean water there. 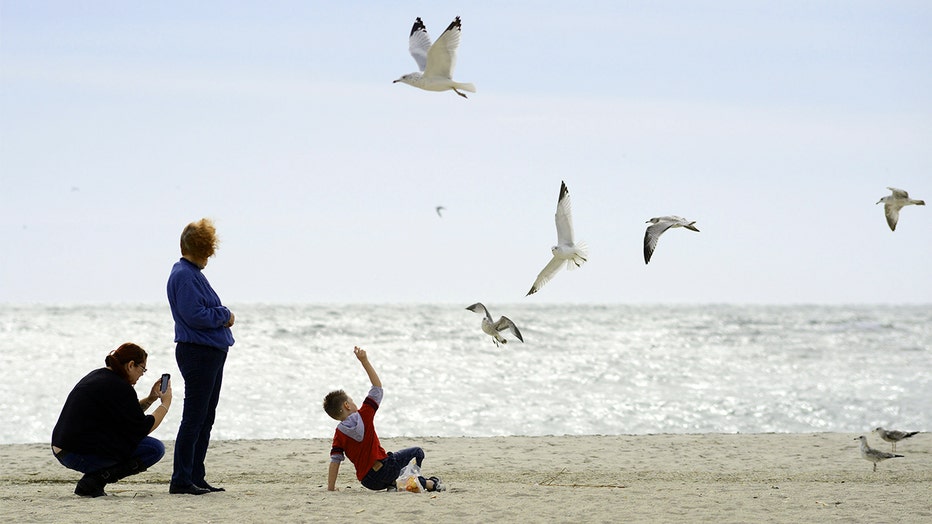 A family from Haskell, New Jersey feeds seagulls on one of the state's southern beaches in Cape May, a city along the Delaware Bay, where an increase of "flesh-eating" bacterial infections has been noted. (William Thomas Cain/Cain Images)

Each of the men infected with V. vulnificus necrotizing fasciitis from the New Jersey study had compromised immune systems due to underlying disease when they contracted the infection.

One of the 64-year-old men developed heart irregularities during his third round of bandage removal and later died, and the 60-year-old man had to have all four of his limbs amputated after developing shock, respiratory failure, and disseminated intravascular coagulation (a condition that causes small blood clots to form around the body).

Cases of V. vulnificus necrotizing fasciitis are still incredibly rare, so there's no need to panic, according to Doktor.

"For most healthy individuals without risk factors, being in or around the water poses no increased risks," she said.

Doktor warned, however, that physicians need to be ready for potential cases to appear in their clinics even if they have never seen a case before.

She also warned those with compromised immune systems as well as anyone who has broken skin to remain vigilant after swimming in the ocean, and especially after swimming in estuaries where salinity is higher than freshwater but lower than seawater, and to contact a physician immediately if any skin changes occur after exposure to water.