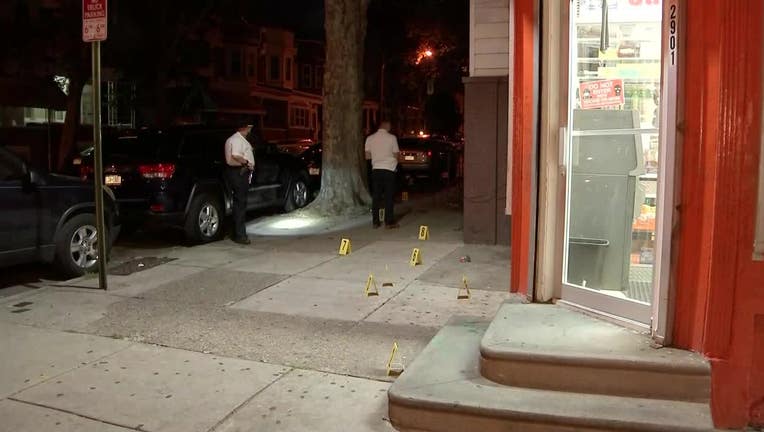 Police are investigating a double shooting outside of a corner store in North Philadelphia.

PHILADELPHIA - Philadelphia police are investigating a number of shootings across Philadelphia that sent at least five people to area hospitals overnight.

The first incident occurred around 10:45 p.m. Monday near the 4400 block of Holden Avenue in West Philadelphia.

Two people, a 37-year-old woman and a 25-year-old man were taken to Presbyterian hospital after they were struck in the legs by gunfire.

Both are listed in stable condition and the female victim is said to have suffered a graze wound, according to police.

The second shooting, in East Germantown, has left a 36-year-old man in critical condition after police say he was shot in the stomach shortly before midnight Monday night.

Shots then rang out near a corner store on the 2800 block of North 27th Street in North Philadelphia around 1 a.m. Tuesday morning.

Police say a 29-year-old female bystander was shot when two men began shooting at each other near the store. She was listed in critical condition after suffering gunshot wounds to the chest and back.

One of the suspects, a 32-year-old man, was shot in the left shoulder and taken to the hospital in stable condition.

The second suspect has been described by police as a Black male wearing a baseball cap and white t-shirt.

Police are also investigating a fourth shooting that sent a 46-year-old man to the hospital.

The victim was taken to the hospital in a private vehicle after he was shot once in the left thigh near the 2500 block of Bonaffon Street around 1:30 a.m.

Police say the vehicle that took him to the hospital could not be located after the incident, and no shooting scene was found. The investigation is ongoing.

So far, no arrests have been made in any of the incidents.