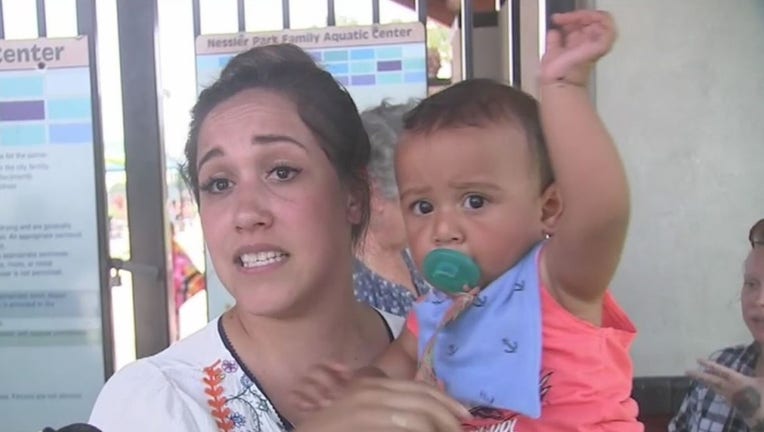 TEXAS CITY, Texas - Area mothers are rallying around a Texas City mother who was asked to leave a city pool when she refused to stop breastfeeding her son.

A couple dozen mothers held a “nurse-in” at Nessler Swimming Pool, breastfeeding their babies in the wake of the incident.

"I don’t stand for a lot, but I will stand for this,” said Misty Daugereaux.

Daugereaux was at the Nessler Family Aquatic Center Sunday when she began breastfeeding her 10-month-old son Maxx.

"The lifeguard came from behind me and he leaned over my shoulder and he asked, ‘Ma’am, are you breast feeding?’ I was like, 'Yes, as a matter of fact I am.' He was like, 'You can’t do that here, it’s a public pool,' and I was like, 'I absolutely can,'” explains Daugereaux.

The mother of two says the manager then came over.

The Texas City Police Department was called and, as seen from body camera footage, an arriving officer told Daugereaux that the manager wanted her to leave due to her conduct.

Daugereaux wrote about the incident on Facebook saying, “I got kicked out of Nessler Aquatic for breastfeeding.”

Several mothers, some holding signs, joined Daugereaux at the pool the next day, breastfeeding at the pool in support.

"It’s the most invigorating feeling in the world to have so much support. I walked out of these gates feeling defeated,” explained Daugereaux.

"The idea that somebody would shame a mom and kick her out of a public place for feeding her baby is very upsetting for me,” said Andrea Miller, who is a member of the Moms of Galveston County Facebook group.

"Women who choose to breastfeed should be supported socially and legally,” said Sorcha Brown.

According to the law, a mother is entitled to breastfeed her baby in any location in which the mother is authorized to be.

"I think this is a women’s rights issue. Women should not be told what to do with their bodies, especially when it comes to feeding their babies,” said Lorna McHone.

"We, the city of Texas City are reviewing the nursing concerns raised at the Nessler Pool and how it was addressed by our staff. We apologize to Misty Daugereaux as it is clear she was offended by how she was treated at our City Facility. City policies and procedures will be reviewed and revised as deemed necessary.  Any deficiencies regarding our employee’s actions will be addressed with further training.”