DALLAS - The deadly winter weather that tormented the South this week with subfreezing conditions and left more than 3 million Texans without power has drawn attention to the country’s electricity system — and its vulnerability to more extreme weather events linked to climate change.

Scientists say as climate change worsens, severe weather conditions that go beyond historical norms are becoming more common — such as the severe cold in Texas or last year’s heatwave in California that sparked deadly wildfires.

But power grids, such as the one in the Lone Star state, are designed for predictable seasonal weather shifts. Experts say to better prepare for future extreme weather events, it will take both a collective agreement to invest — and money.

"We don’t design everything for all conditions, because that would be more expensive," said Joshua Rhodes, an energy researcher at the University of Texas in Austin. "Obviously these conditions we’ve had in the past week in Texas are beyond the scope that we designed (the power grid) for. So we need to figure out — do we need to make it more robust?"

The major winter storm, bringing historic snowfall and single-digit temperatures, created a surge in demand for electricity to warm up homes unaccustomed to such cold weather. As a result, the state’s power grid buckled under the strain, causing widespread blackouts, among other concerning issues. 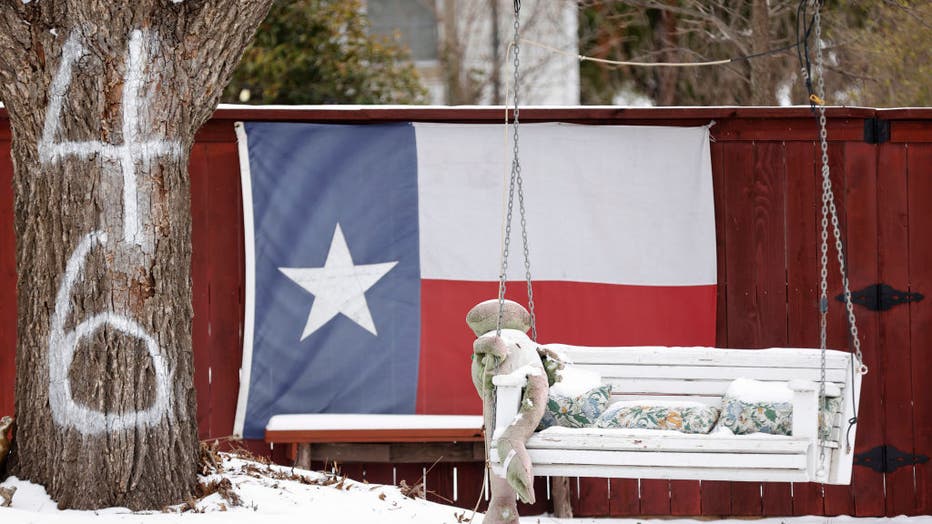 FORT WORTH, TX - FEBRUARY 18: A swinging bench hangs from a tree after a snow storm on Feb. 18, 2021 in Fort Worth, Texas. (Photo by Ron Jenkins/Getty Images)

A power grid needs to be balanced at all times, Rhodes explained on Twitter. If supply and demand get knocked out of balance, as it did this week in Texas, the entire system can go down. Demand skyrocketed — so to keep the whole system in balance — rolling blackouts were put in place.

Utilities from Minnesota to Mississippi imposed rolling blackouts to ease the strain on electrical grids buckling under high demand, but Texas saw the biggest impact.

But this week, the state faced far beyond what it had planned for. By Wednesday, 46,000 megawatts of power were offline statewide — 28,000 from natural gas, coal and nuclear plants and 18,000 from wind and solar, according to the Electric Reliability Council of Texas (ERCOT), which operates the state’s power grid.

The grid had begun preparing for the storm a week ahead of time, but it quickly reached a breaking point early Monday as conditions worsened and knocked power plants offline, ERCOT President Bill Magness said.

Some wind turbine generators were iced, but nearly twice as much power was wiped out at natural gas and coal plants.

"Once the temperatures showed up on the weather report, there is nothing that really can be done. It takes time to finish the maintenance and years to build new infrastructure," Rhodes said.

The disaster in Texas and other states "is a reminder that our nation’s critical infrastructure is vulnerable to extreme weather events and we can no longer turn a blind eye to the resiliency investments needed to protect it,'' said Sen. Tom Carper, D-Del., chairman of the Senate Environment and Public Works Committee, who met with President Joe Biden at the White House last week.

"The cost associated with addressing climate change and improving our infrastructure’s resilience is always going to be less than the cost of rebuilding or failing to act," Carper said.

As global surface temperatures increase, the possibility of more droughts and increased intensity of storms will likely continue to occur — such as more frequent hurricanes and heatwaves, the U.S. Geological Survey says.

Extreme weather events caused 67% more major power outages in the U.S. since 2000, according to an analysis by research group Climate Central. In addition to the damage to the electrical grid, the group also pointed to research showing how extreme weather costs the U.S. economy billions of dollars annually and impacts public health.

Daniel Cohan, an associate professor of civil and environmental engineering at Rice University in Houston, said every one of Texas’ sources of power supply under-performed this week, further highlighting how vulnerable the system is to changing weather patterns.

"Every one of them is vulnerable to extreme weather and climate events in different ways. None of them were adequately weatherized or prepared for a full realm of weather and conditions," he wrote on Twitter.

Gas-fired plants and wind turbines can be protected against winter weather, as is done routinely in colder, northern states. But this requires expensive investments in equipment and other necessary measures.