At first, Jennifer Martin brought books home from her classroom at the start of the pandemic and started a rudimentary checkout system. But now her library has grown by the thousands, thanks to donations from strangers across the globe.

AUSTIN, Texas - A Texas teacher’s idea to turn her garage into a small library for her students during the pandemic has grown into a collection with thousands of books, thanks to donations from strangers across the globe.

Jennifer Martin, who is a teacher in the Del Valle Independent School District in Austin, Texas, came up with the idea after her school switched to virtual learning. She not only missed seeing her students in person, but also wanted to provide better access to books since the closest library was across the freeway.

At first, Martin brought books home from her classroom and started a rudimentary checkout system. But now her library has grown to have more than 4,000 books, repeat customers and even monthly giveaways.

Martin, who has been teaching for 22 years, has a special place in her heart for reading and books.

"I did build libraries in Uganda with the volunteer organization 12 years ago," Martin said. "I went halfway around the world to build a library in another country. I never thought I would be doing it in my own United States because of a lack of access. So to me, that’s profound." 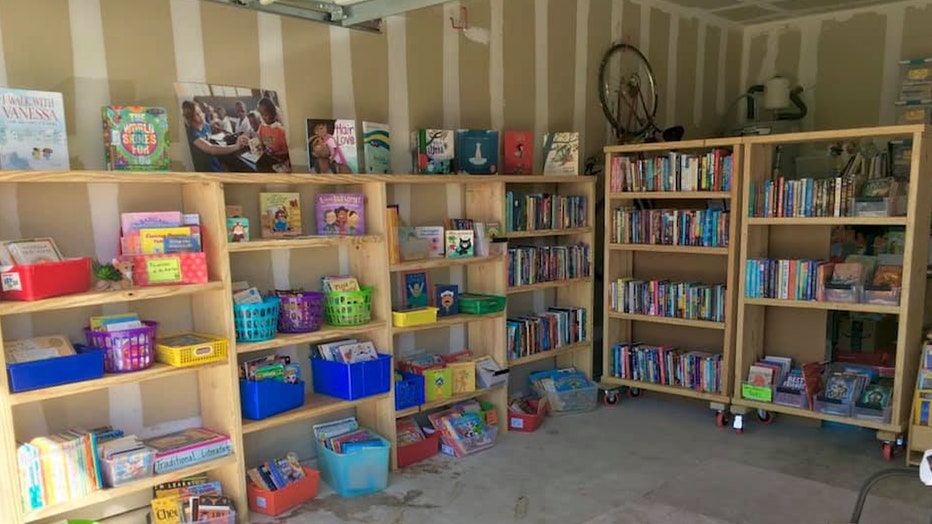 RELATED: ‘I fight for them’: Maine veteran builds temporary housing for fellow vets who are homeless

Martin got the idea for her library after the switch to virtual learning in March of 2020.

"There’s so many kids that live in my neighborhood, many of my own students. Some lived on my own street or just two streets over, they could ride their bike over here," Martin said. "It originally started with my hodge-podge shelving from school and just mismatched whatever, but I had accumulated 1,500 books, at least, in my own classroom library. I did not realize I had that many."

So Martin put the word out that she had her makeshift library were ready and open to any student in the area that wanted to check out a book.

"I had a grand opening, I guess you call it a soft opening, August 16, but a grand opening August 29 where we had popsicles for everybody who came and some balloons," Martin said. 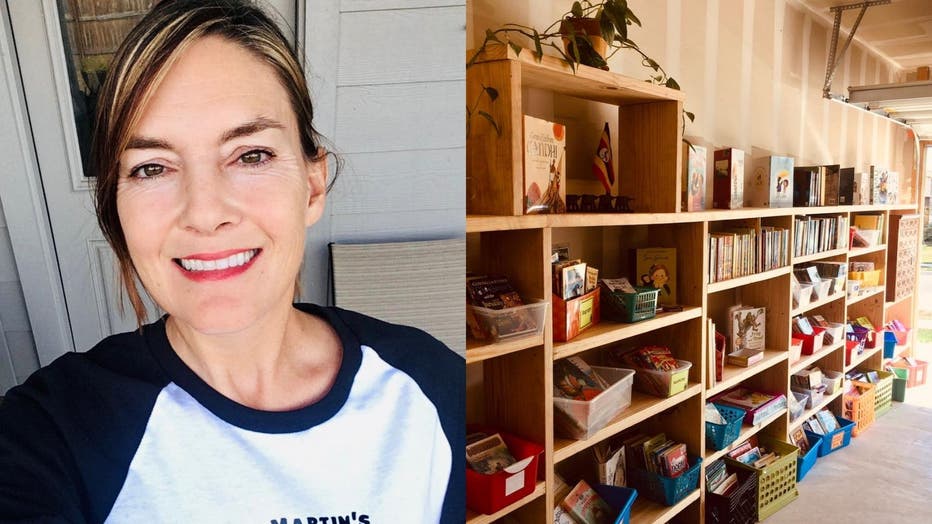 Jennifer Martin pictured alongside her garage library in Austin, Texas.

With the help of her friends as well as the community, the word spread like wildfire and Martin said she could not believe the response.

"Basically, I had friends, originally, before there were any news stories. They shared it on their neighborhood nets and a lot of different neighborhoods. Some have a lot of people whose kids grew up and they had all these really fabulous books in good condition. Even my chiropractor, his wife put it on her neighborhood net and they live in west Austin which, it’s kind of a ritzy area, and she brought me a whole Outback full of books back in September," Martin said.

Neighborhood nets act as message boards for certain neighborhoods and communities that allow people to see what events or news may be impacting their immediate areas.

Students of all ages from pre-K to high school were visiting her garage not just her neighborhood, but from neighboring subdivisions as well. 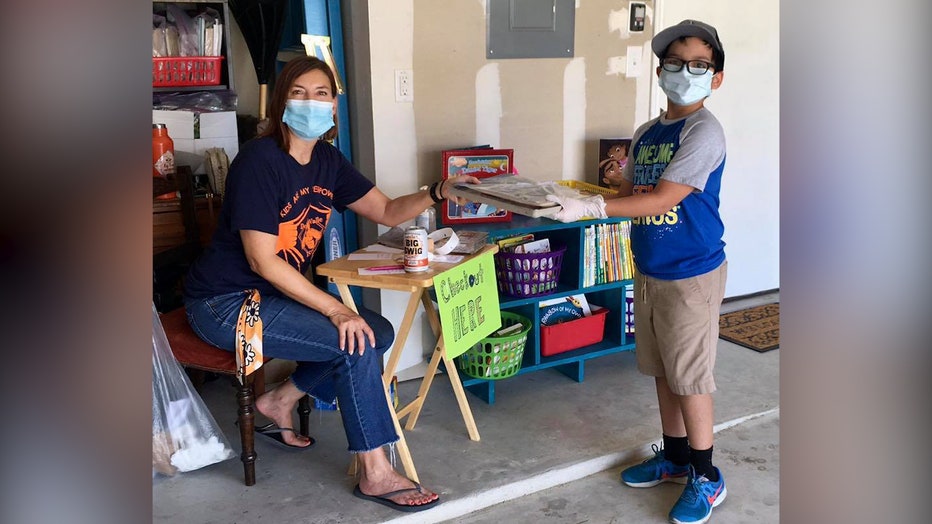 Jennifer and a student checking a book out.

And that’s when the donations started to roll in. Martin said she’s gotten so many books now that she’s even able to do monthly giveaways.

"Everybody can come and fill a whole bag of books and take them home," Martin said. "This is in the interest of building and developing and expanding a child’s personal library at home which is so important that kids have books in their home that are theirs."

More and more people were visiting her library and the attention Martin started to receive was overwhelming. Not only was she getting donations from neighbors, but donations were coming in from people across the country and the world.

"I’ve got a bunch of books right now from California, from New York, from Iowa. A woman has bought them off of our Amazon wish list from Britain. A woman in the U.K. A man in Italy saw the story and emailed me. So, it’s really blown up in a way that I had not expected or imagined. I mean, really, I didn’t imagine any of this. Now we have 4,000 books in this library," Martin said with a smile.

And Martin isn’t just stopping at the monthly book giveaways. Her most recent endeavor has been book raffle giveaways where she gifts entire book sets to a lucky winner.

"The last thing is that I’m starting to have raffles," Martin said. "I had one really big raffle where we had some different prizes but now I'm getting book sets, like the whole Roald Dahl collection, with the idea of just trying to garner more interest for people who haven't come."

As her garage started to become inundated with books, Martin knew it was time to upgrade her makeshift shelving. A friend who has a woodworking business volunteered to create proper bookshelves.

"I opened the library for a couple of weeks with my regular shelving and then as I was talking with him, he was like, ‘Oh no, we can do something about that,’ and it’s 18-feet of shelving on this wall," Martin said, gesturing to her garage, "and that made the whole thing legitimate."

Martin now also has a set system in place and said the library runs like clockwork.

"Basically, I have bags, I have masks, I have everything that people need that they can fill a whole grocery bag of books and take it with them. Brand new teachers who need books for their classroom, I’ve helped out a couple of teachers, but it’s mostly kids," Martin said.

"I basically have notecards and I write their name on it and they check out two. And when they finish reading them, they bring it back. There’s no due date, there’s no fines, that is not the intent here," Martin continued. "They’re filling out the card, I check it off when they return it and that’s a way I can keep count of how many checkouts we’ve had, which we’ve had over 600 books checked out. We have over a hundred users and a lot of repeat users. We’re a pre-K through 12th-grade library. I have some middle and high school students that come regularly, like every Wednesday, and get books, which is exciting to me to see older students reading." 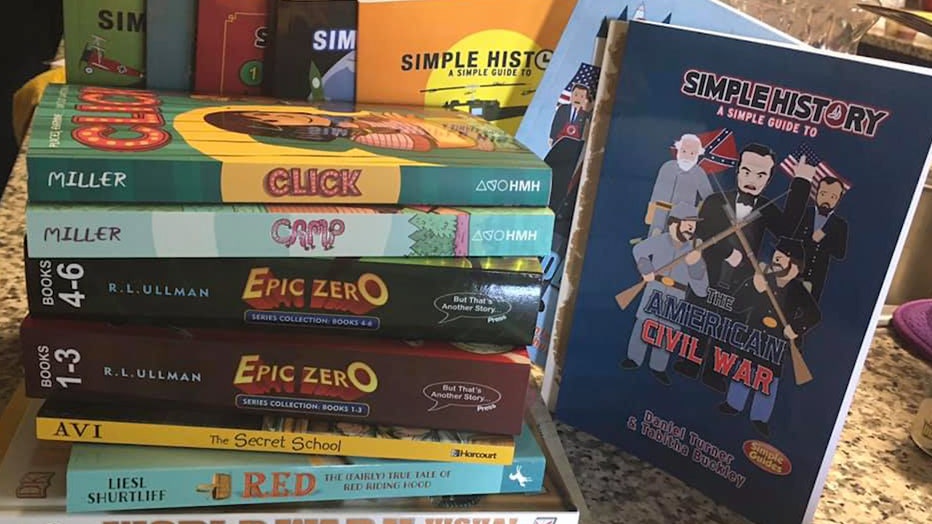 RELATED: 100-year-old golfer celebrates birthday on the green; says her secret is 2 shots of whisky every night

And with the ongoing pandemic, Martin said she and her father, who also lives in the home, take every precaution to keep the students and themselves safe.

Now into 2021, Martin is ecstatic that people are still talking about her humble idea to start a garage library.

"It’s great, I can’t believe that people are talking about it still and it’s January," she said.

Since her garage library has gained so much popularity, Martin said that the East Travis Gateway Library District has recently purchased a piece of land with the intent to build a new library in the Del Valle School District.

"I do think that the attention that our garage library has received might have highlighted the need in the community a little bit and there’s more community members speaking up for what they would like and that’s what it takes. It’s not me saying, ‘Hey, we need a library.’ It’s everyone saying, ‘Yes, we really want this,’" Martin said.

"There’s a lot of progress that I feel like we’re on the cusp of and I’m happy about that just in an overall way," Martin added. "And if I can be a part of any of that, I think that’s awesome and I feel really proud." 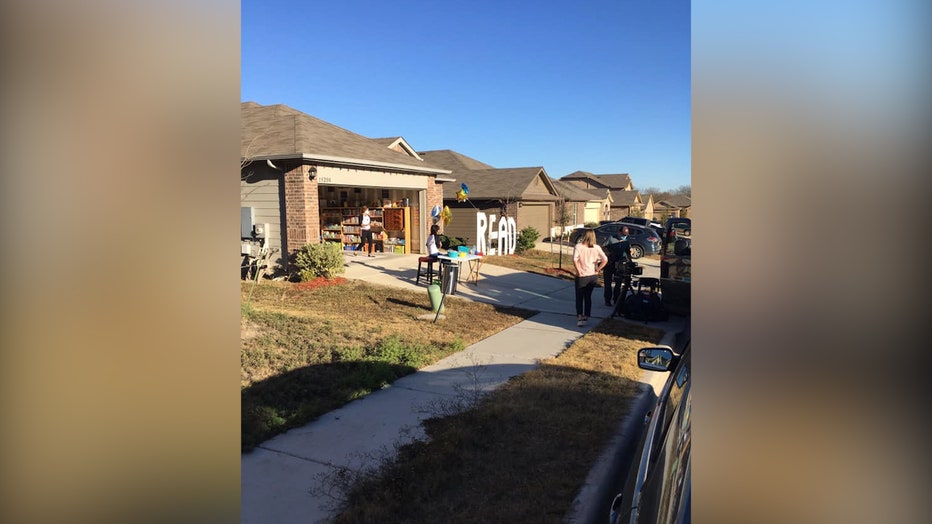 RELATED: 'Not as good as in-person:' Day in the life of a virtual teacher

Martin plans to continue operating her garage library until a more accessible one is made available to the community. So, in the meantime, she will have to keep parking her car outside.

"I used to park it in the garage," Martin chuckled. "It’s still possible to do so but I put a big, large carpet square in here. It just makes it nicer. So, I park out front now. If it ever hails, I mean, the car will just get damaged. It is what it is because now, I just can’t park in here."

For anyone looking to donate, visit the official website - where Martin also keeps an Amazon wish list of books she hopes to add to the library’s collection - at www.neighborhoodbooks.org.