PHILADELPHIA - Local, state and federal officials gathered at City Hall to further address Wednesday's hours-long violent standoff, which resulted in six officers being shot and another injured in the chaos.

Anger and frustration were at the forefront of much of the speeches made by Governor Wolf, Mayor Kenney, Commissioner Ross, Senator Bob Casey, U.S. Representative Dwight Evans, Councilman Darryl Clark, Councilwoman Cynthia Bass, and many others.

At the same time, the city officials repeated emphatically that they are optimistic that with hard work and the passing of legislations by the right government channels that the issues of ongoing crime and violence in Philadelphia can be resolved. 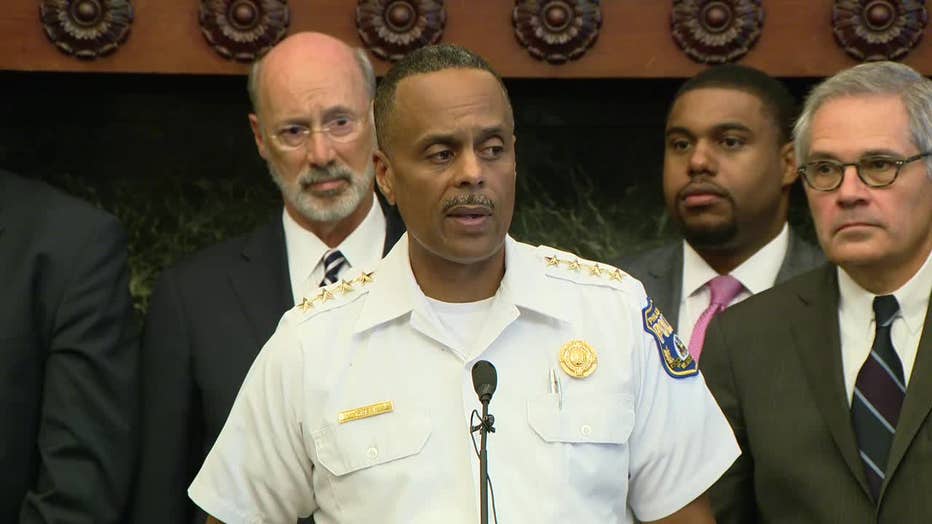 “Wednesday was a heart-wrenching day for Philadelphia,” Mayor Kenney opened Thursday’s press conference on the shootout in North Philadelphia.

He went on to thank the “brave officers of the Philadelphia Police Department” who spent over seven hours managing the hostile and violent situation. He repeatedly stated how proud he was of the officers. 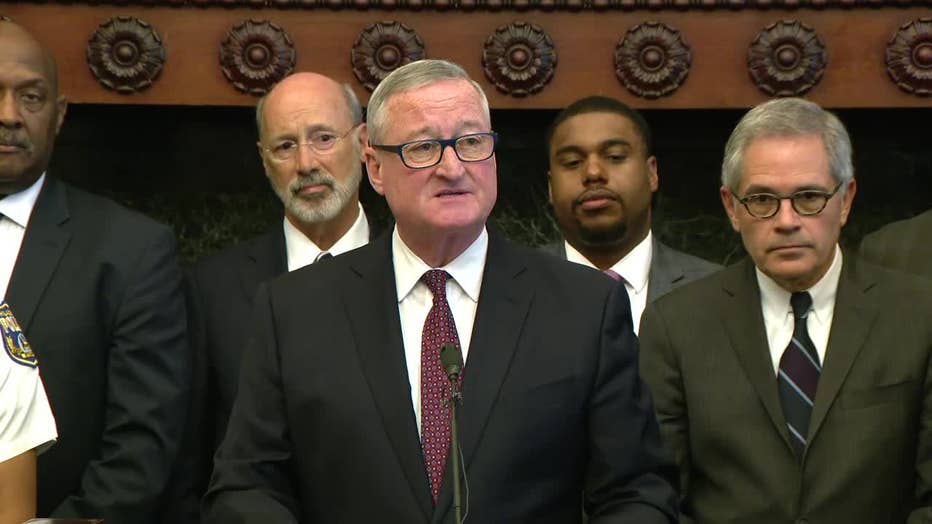 He called the violent standoff  “reprehensible” and the fact that the community was put in harm’s way “devastating.”

However, Mayor Kenney noted that Wednesday’s violence was a “devastating reality for many Americans today” and referenced last week’s shooting in El Paso, Texas and Dayton, Ohio.

In January, the city launched a series of programs targeted at anti-violence but noted that city officials can only “do so much.”

Mayor Kenney says gun violence will continue to tear apart the city of Philadelphia and families.

Rep. Movita Johnson- Harrell is one of the local officials calling for a change when it comes to guns and gun violence in Philadelphia.

“Step up or step aside,” Mayor Kenney urges the federal government before calling Commissioner Richard Ross to speak on the standoff.

Commissioner Richard Ross revealed in Thursday's press conference that initially he wasn’t optimistic he admitted when he learned of the standoff.

‘This has to stop:’ Officials address ongoing violence after North Philadelphia standoff

Local, state and federal&nbsp;officials gathered at City Hall to further address Wednesday's hours-long violent standoff, which resulted in six officers being shot and another injured in the chaos.&nbsp;FOX 29's Chris O'Connell reports.

Before SWAT arrived to the scene, two officers were trapped inside the building with the gunman, identified as Maurice Hill, who was armed and dangerous.

“That was an incident unlike anything I’ve ever seen in my 30 years,” Commissioner Ross stated. Wednesday's standoff was called "absolutely unnerving" by the commissioner who went on to commend the officers who were trapped inside the home with Hill. "One of the things that I’m just amazed by is the ability of those two officers to remain calm for as long as they did – for hours."

While addressing Philadelphia police officers, he reminded them that they are appreciated.

Afterward, Commissioner Ross finished speaking, Governor Wolf gave his address which was full of forward-thinking action plans as well as an impassioned call on officials in power to ensure that action is taken and legislations will be passed to get guns “out of the hands of criminals.”

“This has to stop,” Gov. Wolf urged before leaving the podium at City Hall.

U.S. Senator Bob Casey commended police officers for their ability to maintain the situation and protect the affected community during the standoff.

In regards to policies and what is being done to address gun violence, Sen. Casey stated that the U.S. Senate needs to “finally, at long last, a ban on military-style assault weapons which are weapons of war that should not be on our streets.”

As gun violence continues across the city, officials are calling for a change.

In his address, Sen. Casey said that the American people are being asked to surrender to gun violence as the federal government hesitates to enact proper measures and legislations.

“I am not a medical professional but you don’t have to be to know that when a child experiences that kind of horror, that kind of trauma, that kind of impact can stay with them for a long time,” Sen. Casey stated.

U.S. Representative Dwight Evans said that these messages advocating for anti-violence regulations are falling on deaf ears and are not “new” issues.

“It’s unfortunate that we come together under these circumstances,” Rep. Evans said. “Enough is enough.”

He called on the public to collectively work with police and city officials on these ongoing issues with violence.

Council President Darrell Clarke and Councilwoman Cindy Bass were avid in their calls for the Philadelphia community to come together to end violence.

"There are too many weapons on the streets," Clarke stated.

Councilwoman Bass focused on the traumatic impact Wednesday's event could have on the Nicetown-Tioga community.

“The amount of trauma inflicted on this community last night is absolutely unacceptable,” Councilwoman Bass said.

She revealed that on Saturday, a community meeting will be hosted to inform and empower the community in hopes of encouraging "our community to do more."