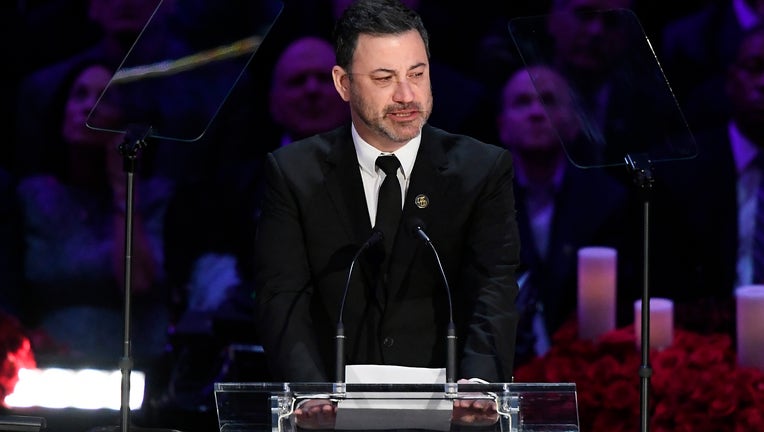 LOS ANGELES - An emotional Jimmy Kimmel addressed thousands in attendance at the public memorial for Kobe Bryant and his daughter Gianna, where he opened the show with a tearful tribute, saying the world should be “grateful for the time we had with them.“

“This is a sad day, but it is also a celebration of life, of their lives and of life itself,” said Kimmel as he struggled to hold back tears.

Kimmel went on to praise sports as unique in that it brings together people from various backgrounds to celebrate something they all love.

Nearly the entire crowd heeded Kimmel’s suggestion that they introduce themselves and shake hands and hug the people next to them. That was followed by a spontaneous chant of “Kobe.”

Many in attendance, including  Bryant’s former coach Phil Jackson and teammate, Shaquille O'Neal, looked on with sadness as Kimmel reflected on the career of the late NBA player.

“Everywhere you go, you see his face, his number, Gigi’s face, Gigi’s number, everywhere at every intersection,” said Kimmel.

Kimmel remarked on Bryant’s impact, not just as a sports superstar, but as an artist, with the dozens of murals honoring the NBA champion painted all over the world as a testament Bryant’s impact on his fans.

“There are hundreds of murals painted by artists who were inspired, not because he’s a basketball player, but because Kobe was an artist, too,” said Kimmel.

“And not just in L.A., across the country in Kobe’s hometown, Philadelphia, and Italy, and India, the Philippines, China, New York, Phoenix, Boston, for God’s sake,” Kimmel continued. “In places where he would be booed on the court, Kobe is missed.”

Kimmel would go on to introduce Bryant’s widow Vanessa, who received a standing ovation from the crowd.