‘This is not okay’: Sarasota driver traveled nearly four times the speed limit in school zone

Sarasota police officers were baffled when they had to pull over a driver for traveling nearly four times the speed limit in a school zone.

SARASOTA, Fla. - Sarasota police officers were baffled when they had to pull over a driver for traveling nearly four times the speed limit in a school zone.

The police department shared an image on the agency's Facebook page showing the citation. The officer indicated that the driver was traveling 64 mph in the 15 mph-zone.

"This is not okay," the Facebook post read. "THIS IS NEARLY FOUR TIMES THE SPEED LIMIT...The safety of our children is our #1 priority. Please slow down." 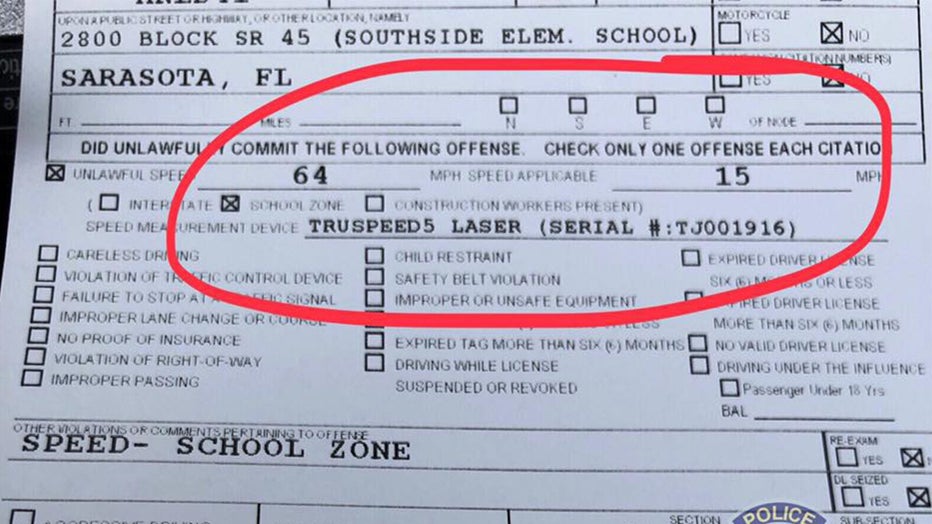 That seems to include the woman who got a ticket for going 64 in a school zone. It happened near Southside Elementary School. She was going more than four times the speed limit.

The woman told the officer she was running late.

"It all boils down to, if we gave ourselves five extra minutes in the morning, we wouldn’t be behind," he said.

The woman who was stopped was given an automatic court date where she’ll meet face-to-face with a judge, who will come up with her punishment.

"We all get to the point where we get into a hurry, but when we get inside a vehicle and behind the wheel and go that fast it’s not just dangerous for the driver but everyone around," said Officer Frank.

Sarasota police continue watching for speeders. They've handed out dozens of tickets, including 18 on the first day of school.

"It's very important that people actually pay attention to the law, the reason why we have the signs here that state how fast we go," said parent Jason Kiefer.

"Whether it be the first week or the second week the end of the year, it’s something that everybody needs to pay attention to throughout the whole school year," he said.

Flashing yellow lights are the first clue you're in a school zone. Ignore them and you may end up seeing police lights in your rearview mirror.

"If you’re speeding in a school zone you will be issued a citation," said Officer Frank.