BENSALEM, Pa. - Another very busy night in the FOX 29 Weather Department as torrential rain fell across the region Monday afternoon, leading to flooding in Bucks County, South Jersey and Philadelphia.

Driver after driver was stranded in Croydon, Bucks County and first responders had to be called out to rescue them.

Turn around, don’t drown is spoken all of the time, but the thing with flash flooding, it can happen in an instant.

And, people weren’t just stranded in their cars, but in their homes, as well.

A line of storms that moved in from the west earlier in the afternoon brought periods of heavy downpours to those areas, prompting earlier flash flood warnings and severe thunderstorm warnings.

The torrent of rain unleashed seven to nine inches of rain in about two hours time, prompting a flash flood emergency to be issued across lower Bucks County, which appeared to bear the brunt of the storm.

Approximately 80 people were evacuated from the homes at the Lafayette Gardens Condominiums in Andalusia, many fleeing the complex with the clothes on their backs. The Red Cross was called to assist the residents as they settled into an emergency shelter for the night.

The Red Cross provided emergency assistance overnight to 56 people in Bucks County whose homes were flooded during yesterday’s storms.

The Red Cross announced Tuesday that anyone who was displaced by flooding in Bucks County and still needs shelter tonight should head to the community resource center now open at the Maltese Room next to the Cornwells Fire Company, 2049 Bristol Pike in Bensalem. It will be open through 5 p.m. If you can’t make it and you have not spoken to the Red Cross, please call 1-800-RED CROSS.

Additionally, Bensalem police say if your car was towed, contact their department at 215-633-3719. If you have property damage, you can contact Keri Schiavo at the Bensalem Police Department using 215-633-3741, and leave a message if no one answers.

By late, Monday afternoon, torrential rain was falling across Philadelphia, as well.

Around 6 p.m., Philadelphia police had closed Route 63, in both directions, due to severe flooding conditions. 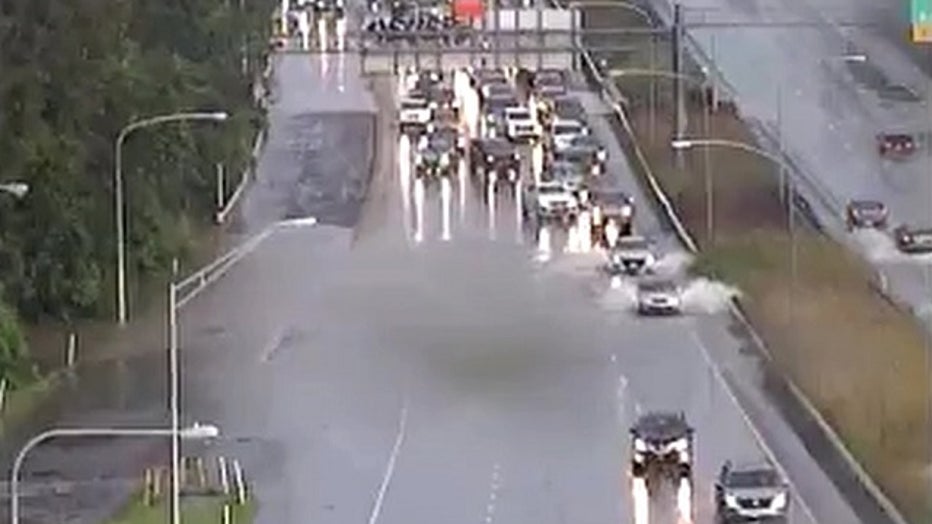 Flash flooding at Woodhaven Road and Millbrook from PennDOT camera

The Vine Street Expressway also closed a lane between 8th Street and Broad, due to flooding conditions. Flooding also caused a portion of the Schuylkill to close. 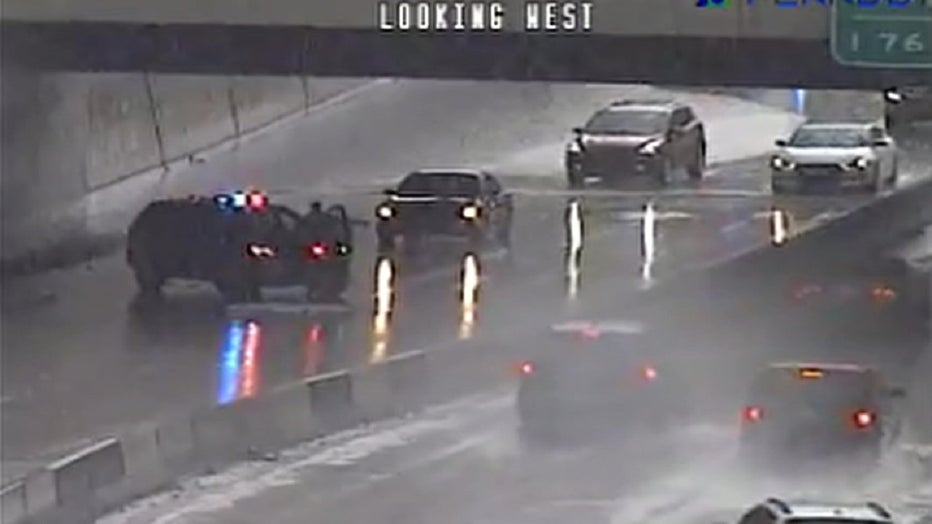 From PennDOT, a Philadelphia police officer shuts down a portion of the Vine Street Expressway as torrential rain floods the highway.