Hank Flynn talks with the very proud family of Olympic gold medalist and Trenton native Athing Mu, and express their joy and pride in her accomplishment.

She’s the first American woman to win the women’s 800 meters since 1968. And, of course her family at home is celebrating.

"It’s all about our Athing! Yeah!" exclaimed Athing’s sister.

A beloved little sister, the fastest runner a family has ever seen, just won an Olympic gold medal.

"It’s a good feeling! It’s amazing! I mean, I’m speechless, honestly. I don’t even know what to say," her sister added. 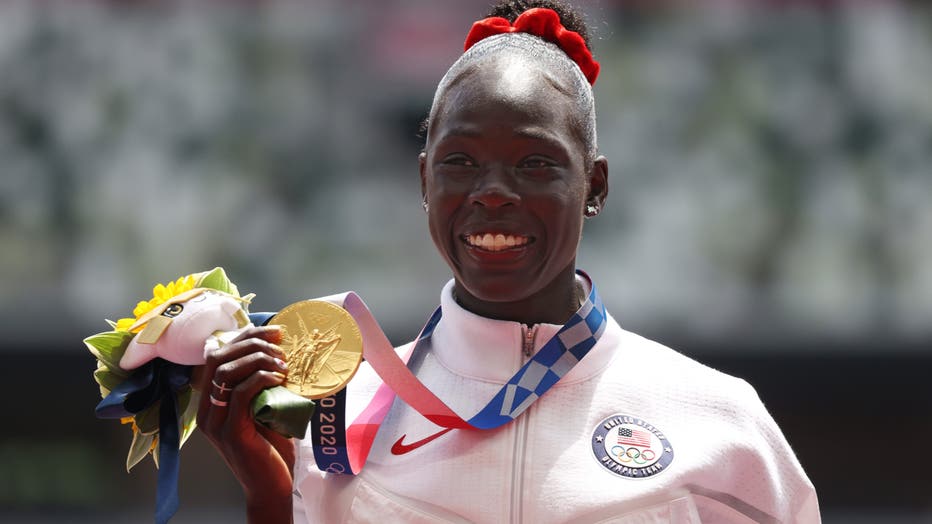 Gold medalist Athing Mu of Team United States poses during the medal ceremony for the Women's 800m Final on day twelve of the Tokyo 2020 Olympic Games at Olympic Stadium on August 04, 2021 in Tokyo, Japan. (Photo by Christian Petersen/Getty Images)

19-year-old Athing Mu, pride of the tight-knit Mu family, won the gold medal in the Olympic 800 meters in dominant fashion Tuesday morning and her euphoric family processed it over a celebratory brunch at IHOP.

The phone calls coming in fast. Athing’s older brother, Malual, ran track for Penn State, the half-mile, like his sister, so he knows and is awestruck by what she’s done – setting an American record in the process.

"She took it out. She definitely got in front off the rip. By the time she got to the 400, she got around like, 57. 57 something. So, she basically even split a 155 to win Olympic gold. That itself – that itself is amazing!" exclaimed Malual.

Athing, a Trenton Central High School graduate, is only 19 and getting faster. Her father, Deng, a boxer in his native South Sudan, commercial fisherman now, who brought his family to America 20 years ago, sees his daughter’s warrior spirit.

"Because I used to be a good runner. A good fighter, to box. So, I used to say I transferred my power to her," proud dad, Deng, explained.