WASHINGTON - President Donald Trump on Friday shared a fake story on Twitter from a satirical website that mockingly claimed Twitter shut down its network to slow the spread of negative news regarding Democratic presidential nominee Joe Biden.

The article was published by The Babylon Bee — which bills itself as “the world’s best satire site” and uses the tagline, “fake news you can trust.”

“Wow, this has never been done in history. This includes his really bad interview last night. Why is Twitter doing this. Bringing more attention to Sleepy Joe & Big T,” the president wrote in the caption.

It was unclear if Trump was aware that the Babylon Bee is a satirical site. 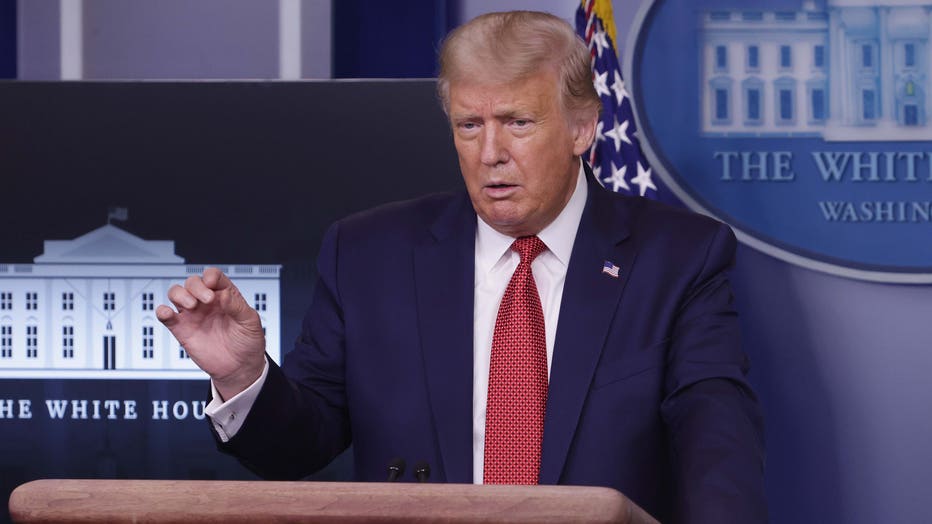 President Donald Trump speaks during a news conference at the White House on Aug. 10, 2020 in Washington, D.C. (Photo by Alex Wong/Getty Images)

The satirical site joked that Twitter made a “last-ditch effort to stop negative stories about Joe Biden.”

“After seeing account after account tweet out one particularly bad story, CEO Jack Dorsey realized he had to take action. Dorsey smashed a glass box in his office reading ‘Break In Case Of Bad Publicity For Democrats.’ Inside the case was a sledgehammer for smashing Twitter's servers,” the story joked.

It continues: “Dorsey ran downstairs and started smashing as many computers as he could, but he did need to ask for some help, as the hammer was pretty heavy. None of the programmers could lift the hammer, either. Eventually, they managed to program a robot to pick up the sledgehammer and smash the servers.”

The phrase "Big T" from Trump’s tweet later trended on the social media platform, prompting Trump to clarify in a follow-up post.

"Big T was not a reference to me, but rather to Big Tech, which should have been properly pointed out in Twitter’s Fake Trending Section!" he wrote.

Trump’s posts come amid an effort by social media companies like Twitter and Facebook to limit the spread of a story published by the New York Post, which cited unverified emails from Biden’s son Hunter that were reportedly discovered by Trump’s allies. The story has not been confirmed by other publications.

The action was decried by Trump and his supporters, including congressional Republicans. Many have criticized social media platforms, alleging the companies censor conservative messaging.

Twitter initially responded by banning users from sharing links to the article in tweets and direct messages because it violated the company’s policy prohibiting hacked content. But it didn’t alert users about why they couldn’t share the link until hours later.

Dorsey said Friday that Twitter was wrong to block URLs to the unverified story.

“Straight blocking of URLs was wrong, and we updated our policy and enforcement to fix,” he tweeted. “Our goal is to attempt to add context, and now we have capabilities to do that.”

Facebook said it was “reducing” the story’s distribution on its platform while waiting for third-party fact-checkers to verify it, something it regularly does with material that's not banned outright from its service.