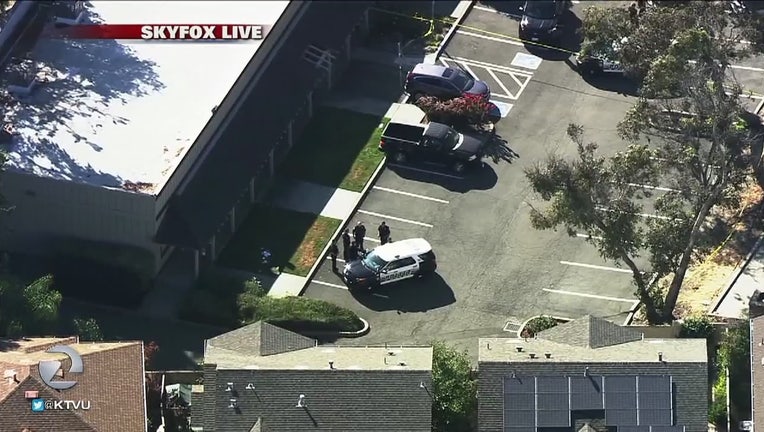 FAIRFIELD, Calif. - Newborn twins were born and abandoned behind a Fairfield strip mall Tuesday afternoon, and only one newborn survived.

The discovery was made in the 300 block of Pittman Road, alongside I-80, in an area full of businesses and hotels.

Police were alerted at about 4 p.m. by a tenant who said a woman was in distress behind the commercial building.

"There was also a call that this woman was with two infants who appeared to be recently birthed, newly-born," said Lt. Jausiah Jacobsen of the Fairfield Police Dept.

The first arriving officer found the two newborns on the ground, in a narrow breezeway, but no mother.

"He immediately recognized that both infants appeared to be in distress," said Lt. Jacobsen, "But unfortunately the other infant was already deceased on scene, there was nothing the officer or fire personnel could do."

As the scene was unfolding, new calls came in, about a woman bleeding in the vicinity of Central Place, about a 10-minute walk away.

Police detained the woman and transported her to a hospital for treatment.

The surviving infant was rushed to an emergency room.

"You had a really competent crew there to handle the situation, and I think they did the best they could," Fairfield Fire Captain Dave Pierson told KTVU.

Pierson said the call was emotionally tough, even for veteran paramedics.

State law allows babies to be surrendered at fire stations, hospitals, and churches within 72 hours of birth with no questions asked. Pierson's Fire Station 35 is closest to the scene, just two miles away.

Baby surrender kits are in the station should the need arise.

"We give a wristband to the parent and put one to the child, and they're numbered the same," explained Captain Pierson, "So we know that person goes with that baby."

Since its start in 2001, the law has allowed for the surrender of more than 1,000 newborns during those first critical hours.

"If people use it, it's a great program, we just need to get people to use it," said Pierson.

The strip mall itself has a church located in it, and there is another on the same block, but for whatever reason, the expectant mom in distress didn't knock at any doors for help.

"It breaks my heart," said Pierson, "and I feel for the mother that she was in a situation she obviously felt hopeless."

Guests coming and going at the hotel next door were stunned by the crime tape and the reason for it.

"I just can't imagine what was going through her mind that she felt that was her only choice," said hotel guest Jackelyn Wiser, while holding her toddler son.

"A lot of people would have loved to have those babies if she didn't want them, so it's just super sad."

By early evening, a Solano County Coroner's van pulled out of the shopping center, an infant carrier, draped in a blanket, on the passenger seat.

The surviving twin was listed in stable condition.

No information was available on the mother, as she is receiving care and not under arrest.

Police would not comment on whether she is homeless.