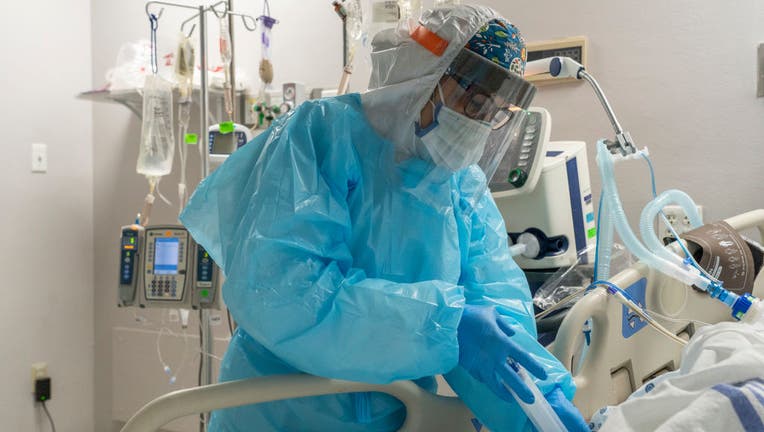 A medical staff member injects sodium bicarbonate into a patient in the COVID-19 intensive care unit (ICU) at the United Memorial Medical Center on Dec. 21, 2020 in Houston, Texas. (Photo by Go Nakamura/Getty Images)

Belgium, Ireland, Germany, France, Italy, and the Netherlands implemented restrictions for travel to and from the UK from Dec. 20, causing chaos at transit hubs just days before the Christmas holiday.

America exceeded that mark on Sunday, just six days after it reached 18 million. The nation’s case numbers have more than doubled in less than two months.

COVID-19 deaths in the U.S. also have been rising, and now total more than 332,000. That’s more than one death for every 1,000 Americans. The U.S. population as of Saturday was about 331 million, according to the U.S. Census Bureau.

The United States accounts for about 4% of the world’s population, but close to 24% of its total coronavirus cases and 19% of its COVID-19 deaths. Health experts believe many cases have gone unreported, however, both in America and internationally.

U.S. health officials believe the coronavirus mutation that set off alarms in parts of Britain is no more apt to cause serious illness or be resistant to vaccines than the strain afflicting people in the United States but it still must be taken "very seriously," the government’s top infectious disease expert said Sunday.

Dr. Anthony Fauci endorsed the decision of U.S. officials to require negative COVID-19 tests before letting people from Britain enter the U.S. He declined to weigh in on whether that step should have been taken sooner. He said the variant strain is something "to follow very carefully" and "we’re looking at it very intensively now."

He said: "Does it make someone more ill? Is it more serious virus in the sense of virulence? And the answer is, it doesn’t appear to be that way." British officials are telling their U.S. colleagues it appears that the vaccines being rolled out will be strong enough to deal with the new variant but, Fauci said, "we’re going to be doing the studies ourselves."

Fauci said the U.S. is at a critical phase of the pandemic, with the worst probably still ahead. He predicted the general population would be getting immunized widely by late March or early April — beyond the front-line workers, older people and certain other segments of the public given priority for the vaccines.

Fauci spoke on CNN’s "State of the Union."