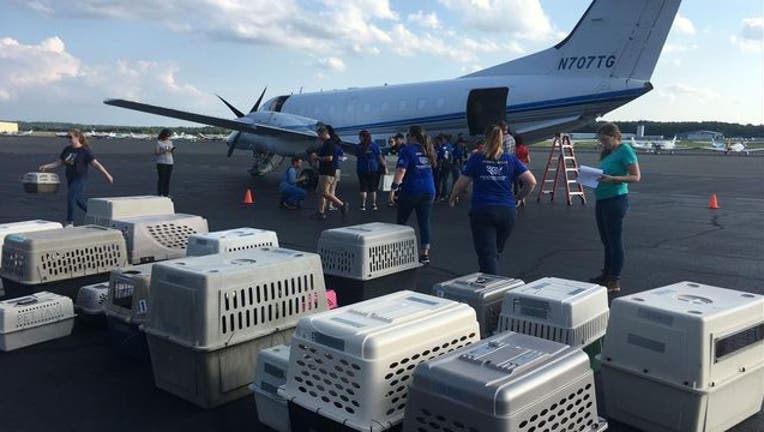 A multi-state rescue effort helped secure and transport more than 120 cats and dogs to safety on Friday.

FOX News - A multistate rescue effort helped secure and transport more than 120 cats and dogs to safety on Friday, removing them from shelters in Louisiana in anticipation of Tropical Storm Barry.

The D.C. based Humane Rescue Alliance teamed up with St. Hubert's Animal Welfare Center in New Jersey to rescue the animals from two Louisiana shelters, St. Landry Animal Care and Control and St. Martin Animal Shelter, which are located in the path of the storm.

Both Lousiana shelters house their animals outdoors, creating an even greater potential for danger and the rescue efforts were intended to free up local shelters to deal with anticipated structural damage and an influx of displaced animals in the state as a result of the storm that is expected to bring 70 mph winds and dangerous storm surge throughout the weekend.

“We are proud to assist our fellow shelters in Louisiana and provide a safe haven for the animals as the region prepares for potentially devastating storms,” Lisa LaFontaine, president and CEO of HRA said in a statement. “As we head into hurricane season, the Humane Rescue Alliance and St. Hubert’s stand ready to take in homeless animals in the path of natural disasters with open arms and find loving homes for them in the region.”

The animals were flown to Manassas Regional Airport in Virginia where they were then distributed to local animal shelters including the Lost Dog and Cat Rescue Foundation, Angels of Assisi, Humane Rescue Alliance, St. Hubert’s Animal Welfare Center, Charlottesville Albemarle SPCA and Animal Welfare League of Alexandria.

Other animals were flown to shelters in New Jersey, Georgia and North Carolina as well to find adoptive homes.

The rescue mission was the first since the D.C. rescue group and the New Jersey-based animal center merged on Tuesday with the specific mission of furthering the St. Hubert’s WayStation program, an animal transport program that cares for homeless or displaced animals, particularly during natural disasters, according to the Humane Society.

"By enriching the organizations on both ends of animal transports, we can weave a safety net for animals in every corner of the country," LaFontaine said in a statement Tuesday.