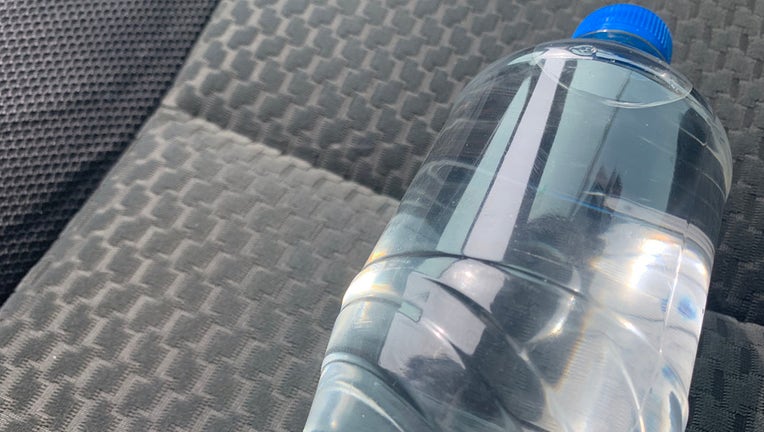 PHILADELPHIA - With overbearing heat bearing down on much of the country, this is a friendly reminder that leaving your water bottles in your car on a hot day can start a fire inside your car - if the conditions are right.

On a hot, summer day - like we're experiencing right now - a full plastic bottle of water can act like a lens, focusing light into a high-energy beam that's intense enough to start a fire. Much like holding a magnifying glass on a sunny day can start a fire, the filled bottle of water does the same thing.

In 2017, a power company in Idaho shared a video of a water bottle burning two holes into a seat of a car. A technician was sitting in his truck when he noticed his leather seat was starting to smoke.

Sunlight through the disposable water bottle torched the cushion, which  he tested with a heat gun. It was 213 degrees Fahrenheit.

But it doesn't have to be just in a car to start a fire. The Midwest City, Oklahoma, Fire Department held a bottle of water in front a piece of paper and, sure enough, it burned a hole straight through the paper.

If you're driving, no need to worry about that water on the seat next to you. The Midwest City Fire Department said, because you're going under bridges and passing buildings and the sun is moving, the sunlight's energy is not in direct contact with the bottle.

LiveScience.com proved this IS possible just not very likely. According to a chemist at the Getty Conservation Institute, when sunlight passes through the car window, it hits the seat with the same amount of energy as a small electric space heater.

When you add the water bottle in, that energy is focused enough that it can easily heat up the material to heat the seat up. However, the scientist said that seats are designed to be fire-retardant and self-extinguishing. thus your car seat is more likely just have a burned hole in it than to actually catch fire.

So while, yes, it scientifically IS possible for a bottle of water to start a fire in your car, it must be lined up perfectly: clear liquid in a round bottle placed at just the right angle from the light source and a flammable material.

Yes, you technically CAN start a fire with a full bottle of water in your car, just don't leave papers, napkins, or anything flammable under it and your car will be mostly in one piece.