FOX 29's Kathy Orr has the latest on the winter storm.

PHILADELPHIA - Another round of significant and measurable snow is expected to impact the region on Thursday, bringing the heaviest snowfall to Philadelphia and areas north and west.

Winter storm warnings have now been issued for counties in Pennsylvania, New Jersey, and Delaware and will be in effect from 4 a.m. Thursday through 10 a.m. Friday. Winter storm watches have been issued in areas that are expected to see less snow.

The watches and warnings cover all of southeastern Pennsylvania, areas along the I-95 corridor in New Jersey, and the northern reaches of Delaware.

The first flakes will begin to fall west of Philadelphia early Thursday morning and engulf the region with mostly snow by 10 a.m.

The rain-snow line is forecasted to sit over Philadelphia which could result in a wintry mix with measurable snow.

The storm will last all day Thursday for most, with snow beginning to subside late Friday morning and into the early afternoon.

As of Wednesday evening, the FOX 29 Weather Authority is forecasting higher snow totals for areas to the north and west, as well as the I-95 corridor could all see 6 to 8 inches of snow.

Areas just south, including Philadelphia, like Salem and Hammonton should see between 3 and 6 inches of snow.

Coastal areas in southern New Jersey and Delaware are expected to only see a dusting to 3 inches of snow as they should see more rain. 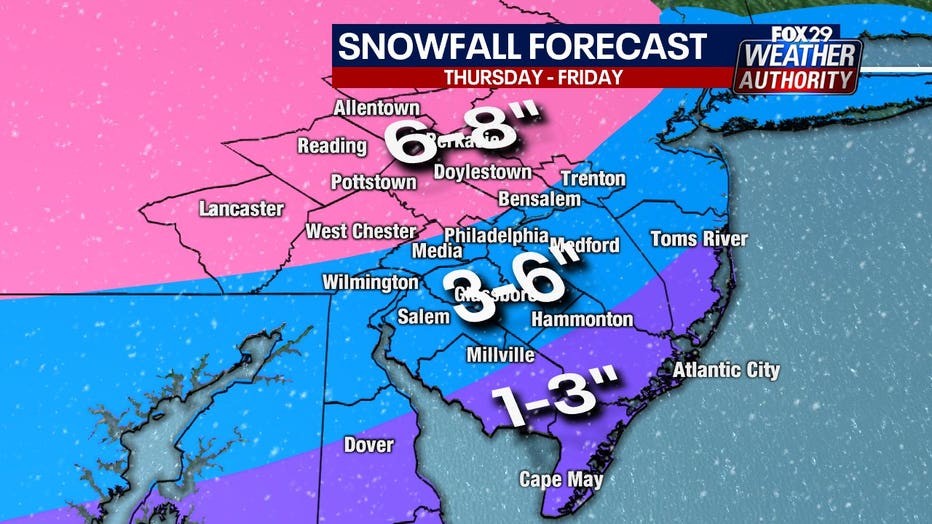 Temperatures are trending a bit colder, which means snow could linger longer tomorrow in the I-95 corridor before the changeover to rain. That could put snow totals for the region more toward the higher end of the range.