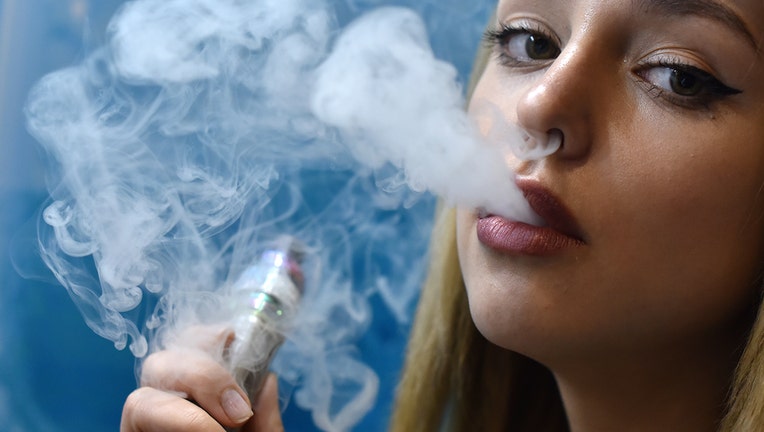 A promoter puffs from an e-cigarette while working at a stand during Vape Jam 2019. (John Keeble/Getty Images)

U.S. health officials continue to look for patterns in the hundreds of serious lung injuries reported in people who use electronic cigarettes and other vaping devices.

A look at what we know so far about the outbreak and the investigation:

WHO IS GETTING SICK?

The latest tally is 1,080 confirmed and probable cases in 48 states and one U.S. territory, including more than a dozen deaths. Health officials say 70% of the patients have been male. More than a third are younger than 21, with patients ranging in age from young teens to 75 years old.

WHAT VAPING PRODUCTS ARE INVOLVED?

WHAT ARE THE SYMPTOMS?

HOW SERIOUS ARE THESE ILLNESSES?

Many of the reports involve severe, life-threatening illnesses in previously healthy people. Many patients received oxygen. Some needed to be put on breathing machines. Antibiotics didn't work, and it's not clear yet whether steroid drugs helped.

“We don’t know how well people will recover from (the lung injuries) and the damage may be permanent,” Dr. Anne Schuchat of the Centers for Disease Control and Prevention said Thursday.

WHAT ARE OFFICIALS DOING?

Even before the outbreak, schools were struggling to crack down on vaping because the devices are easy for students to hide. More than 1 in 4 high school students reported vaping in the past month in the most recent government survey. Health officials have warned for years that the popularity of flavored vape products among kids could result in lifelong tobacco use.

With concern about teen vaping already high, the health crisis spurred some states to stop the sale of flavored e-cigarettes or raise the minimum age for buying e-cigarettes to 21. Massachusetts suspended sales of all vape products for four months, a move that’s been challenged in court. The White House announced plans to ban flavored vape products.

On Thursday, the Federal Trade Commission ordered Juul and five other vaping companies to hand over information about how they market e-cigarettes.

Meanwhile, criminal investigators from the Food and Drug Administration are focusing on the supply chain to find out what's making people sick.

It’s not final proof, but experts who examined lung tissue from 17 patients say the damage looks like chemical burns, similar to what would be seen in people exposed to poisonous gases. Dr. Brandon Larsen of Mayo Clinic Arizona says he believes toxic fumes are causing at least some of the illnesses. The study was published Wednesday in the New England Journal of Medicine.

Incomplete lab testing by FDA continues to find THC and vitamin E acetate, a thickener, in some of the liquids tested, but Schuchat cautioned: “There may be a lot of different nasty things in e-cigarettes and vaping products and they may cause different harms in the lung.”

HOW DO AMERICANS VIEW THE HEALTH DANGERS OF VAPING AND SMOKING?

Americans believe nicotine is a bigger public health threat than THC, according to a survey by researchers at NORC at the University of Chicago. Nearly all adults (90%) believe smoking cigarettes is harmful, and 81% believe vaping nicotine products is harmful.

Fewer see health dangers in marijuana with 65% saying vaping THC is harmful and 58 percent of adults saying smoking marijuana that contains THC is harmful. The nationally representative survey of more than 1,000 adults was conducted Sept. 19-24.

WHAT DO WE KNOW ABOUT E-CIGARETTE SAFETY?

Health experts generally consider e-cigarettes to be less harmful than traditional cigarettes because they don't contain all the cancer-causing byproducts of burning tobacco. And some countries _ including the United Kingdom _ have fully embraced vaping as a public health tool to reduce the deadly toll of traditional tobacco.

U.S. health regulators have generally taken a more cautious approach. In part, that’s because there is virtually no long-term research on the health effects of the vapor produced when e-cigarettes heat a nicotine solution.

The FDA, which regulates nicotine-vaping products, has set a deadline of next May for all e-cigarette manufacturers to submit their products for review. Under FDA rules, only products that represent a net benefit to public health will be allowed to remain on the market.

Health officials are urging people to stop vaping, particularly products that contain THC, and to get medical care if they have trouble breathing or chest pain after vaping.

Schuchat acknowledged a concern about black market products. She said states that license marijuana dispensaries are taking steps to make sure the products they regulate are safe, but she added: “With all the data I've been seeing, I don't know what’s safe right now.”