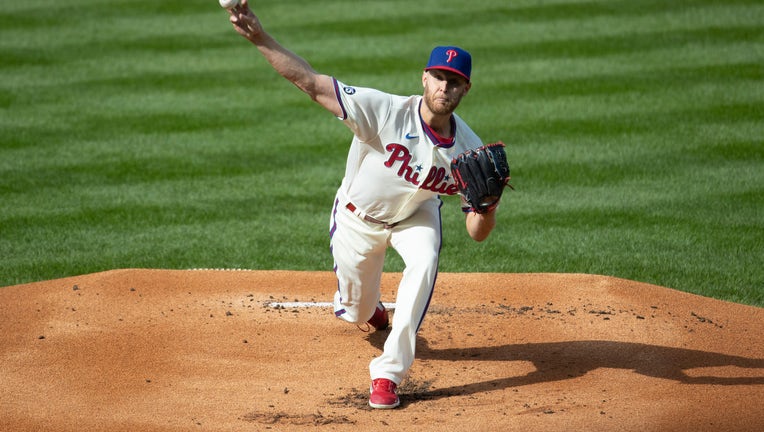 PHILADELPHIA, PA - APRIL 03: Zack Wheeler #45 of the Philadelphia Phillies throws a pitch in the top of the first inning against the Atlanta Braves at Citizens Bank Park on April 3, 2021 in Philadelphia, Pennsylvania. (Photo by Mitchell Leff/Getty Im

PHILADELPHIA - Zack Wheeler allowed only one hit and struck out 10 over seven innings and had two hits and two RBIs at the plate, leading the Philadelphia Phillies over the Atlanta Braves 4-0 on Saturday.

Wheeler retired his final 17 hitters after a one-out single by Travis d’Arnaud in the second inning. He mixed a fastball that reached the high 90s mph with a sinker that had the Braves off balance for the afternoon. The 10 strikeouts were the most by Wheeler since signing with the Phillies in the 2019-20 offseason, and the 10th time in is major league career he reached that number.

"When you have everything working — fastball, change, curve, slider — and you are placing it where you want to, it makes things a lot easier," Wheeler said.

"That’s as good as I’ve seen him," Braves manager Brian Snitker said. "That was a rough day trying to hit (Wheeler.)"

Wheeler’s strong start — teamed with Aaron Nola’s solid outing on opening day — highlights the potential the top of the Phillies rotation has.

"I don’t know if you can say enough great things about what (Wheeler) did today," Phillies manager Joe Girardi said. "He threw some good changeups late in the game. It’s as good as his stuff has been."

Archie Bradley and Hector Neris retired all six hitters in the final two innings. Overall, the Braves struck out 14 times out of 28 at-bats. It marked back to back scoreless outings for Philadelphia’s bullpen, which posted a historically inept 7.06 ERA in 2020.

Wheeler also made a difference at the plate, breaking a scoreless tie in the fifth inning with an RBI single to center off starter Charlie Morton, who had matched Wheeler through the first four innings. In the sixth, Wheeler added an RBI double into the left-field corner off reliever Sean Newcomb.

"I take pride in it," Wheeler said. "I just wanted to move runners and keep it going."

Wheeler is the first Phillies pitcher with a multiple hit and RBI game since Ben Lively on Sept. 5, 2017.

He was allowed back in the box after the National League reverted to letting pitchers hit this season. The designated hitter was adopted in both leagues for the pandemic-shortened 2020 season and seems likely to be restored in the NL after collective bargaining talks next offseason, but the league and players’ association stalled out on talks this spring to keep the universal DH in 2021.

"I had one at-bat in the spring before we got shut down (in spring 2020) and one this spring," Wheeler said. "But we’re hitting a lot in the cage. As a pitcher, you are going to see a fastball. You just have to be able to hit it."

Rhys Hoskins knocked in Philadelphia’s other runs with a fifth-inning broken bat double just inside the left-field line that scored Roman Quinn and Wheeler.

Morton allowed six hits in five innings of work, striking out five and walking two. The fifth inning was his only blemish, starting with a two-out single to Segura and hitting Quinn with a pitch.

"That two-strike curveball to Segura wasn’t a well-executed pitch, especially to an aggressive hitter," Morton said. "The Wheeler hit, I couldn’t believe he got to that. I just have to do a better job on a two strike count. The guys did a great job behind me, but I kind of squandered it there."

Braves: The Braves placed infielder Ehire Adrianza on the 10-day injured list Saturday as part of Major League Baseball’s health and safety protocols. Snitker said Saturday that Adrianza had to leave the club during Friday’s day off to deal with a personal issue. He has to go through MLB’s testing protocols before he can rejoin the club. Infielder Johan Camargo was called up off Atlanta’s taxi squad to replace Adrianza.

Phillies: Outfielder Adam Haseley (hamstring) was available on Saturday. He was pulled early from Thursday’s opener after experiencing tightness in it. Girardi said Haseley is expected to start in Sunday’s series finale.

The series concludes Sunday with the Phillies sending righthander Zach Eflin to the mound against Braves right-hander Ian Anderson. Eflin went 4-2 with a 3.97 ERA for Philadelphia in 2020. Anderson went 3-2 with a 1.95 ERA in six starts in 2020.

It will be Anderson’s first start against the Phillies, who bypassed him with the top pick in the 2016 draft to pick outfielder Mickey Moniak.