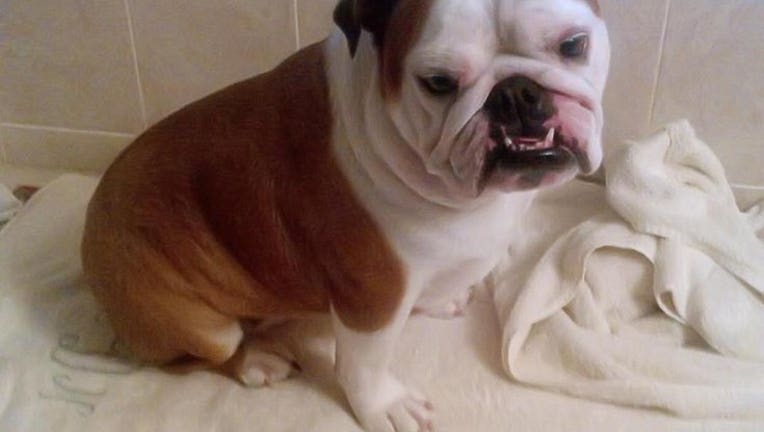 Danielle DiNapoli publicly blamed PetSmart's grooming staff for the death of her dog, Scruffles. She later apologized for blaming the New Jersey store. (Justice for Scruffles)

FLEMINGTON, N.J. - A woman whose dog died during a grooming at a PetSmart store in New Jersey is now apologizing for blaming the store for the death.

Danielle DiNapoli dropped off her 8-year-old bulldog, Scruffles for grooming at the Flemington store on Dec. 29, 2017. Within an hour, the store called her to say the dog had died.

DiNapoli publicly blamed the store’s grooming staff for the death and started a Facebook page — “Justice for Scruffles” — to publicize what had happened. The death soon generated wide interest on social media, and numerous protests and other events were staged over several months.

A necropsy determined that the dog’s death was not related to the grooming but was caused by preexisting health issues. PetSmart sued DiNapoli for defamation, claiming she deliberately withheld the report.

Coors Light will help cover fees for 1,000 people to adopt a dog for Valentine’s Day

In a statement posted Jan. 20 on the Facebook page, DiNapoli wrote: “I would like to take this opportunity to apologize to PetSmart. I never should have said — on television or here on social media — that PetSmart killed Scruffles and for that I am sorry.”

DiNapoli added that she appreciated PetSmart’s cooperation “in getting me the answers about what happened with Scruffles when she was in their care.” She has since shut down the page.

In a statement issued Thursday, PetSmart said DiNapoli had “engaged in a concerted, national smear campaign against the company,” adding that “we are glad that the facts came to light and that truth prevailed in this case.”