DREXEL HILL, Pa. - Four women were honored Thursday for their selfless actions in saving four aboard a medical helicopter that crashed in Delaware County two months ago.

The chopper was on its way to Children's Hospital of Philadelphia with an infant patient aboard and two others. Federal investigators have not said what caused the helicopter to begin its descent, but neighbor's cameras captured it sputter across the sky on a bright Tuesday afternoon.

Emergency responders called it a ‘miracle’ that Moore was able to maneuver the dying chopper onto a Drexel Hill street without injuring anyone on the ground or inflicting massive property damage. 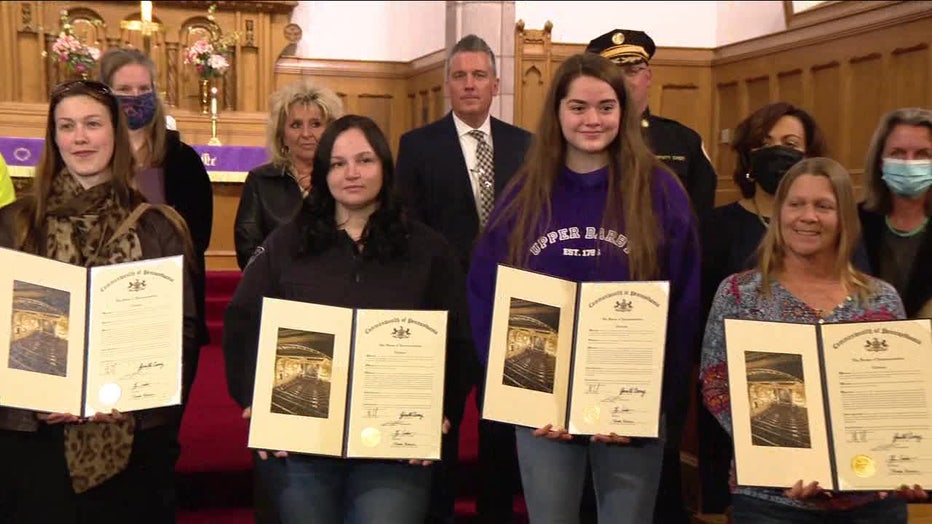 The helicopter first hit a tree then skidded to a stop outside Drexel Hill Methodist Church on Burnmount Road. Just over a month later, the four heroes who rushed to the aide of those aboard the chopper were honored inside the church.

"We saw the fuel coming out, so we started yelling at him to get out. We didn't know how many people were in there, just get out, then he said they needed help," said Donofrio, an Uber driver who was bringing her daughter to a doctor's appointment.

Donofrio said she did not expect to be handed a baby when she ran over to the wreckage. A flight doctor and nurse were also helped from the wreckage without any serious injuries.

Meanwhile, Gray called 911 and assured Moore that he was going to be okay after he was pulled from the wreckage. Moore, a veteran pilot, suffered seven broken ribs, five broken vertebrae and a cracked sternum, according to his father.

"I'm pretty sure that God was my co-pilot that day," Danial Moore told Good Day Philadelphia after he was released from the hospital.

Danial Moore joins Good Day Philadelphia to discuss his recovery and experience in the aftermath of the Drexel Hill helicopter crash.

Hamilton also called 911 and gave her phone to the flight nurse who told dispatchers that he was more concerned for the health of the infant child. The baby was ultimately unharmed.

"[Moore] is breathing, he is talking," he told the dispatcher. "My main concern right now is the 2-month-old child, I need an ambulance here right away."

Jewel, an EMT who was off-duty when she happened upon the helicopter crash, was quick to rush everyone to safety.

"It's more of instinct, go get moving, get everyone to a safer area and work from there," Jewel said.

"They didn't know what kind of danger was in front of them. They didn't know how great the risk was that that copter could have blown up at any moment, they rushed toward the people, and they helped get that child out and the crew out," Zabel said.